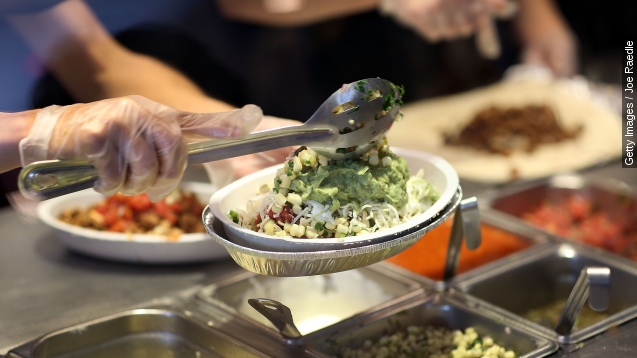 SMS
Chipotle Wants To Hire You … And 3,999 Other Workers Sept. 9
By Ryan Biek
By Ryan Biek
August 24, 2015
Chipotle has a lofty goal: It wants to hire as many as 4,000 new employees in a single day.
SHOW TRANSCRIPT

Chipotle is turning heads after announcing it plans to hire as many as 4,000 workers in one day. (Video via Chipotle)

The restaurant is calling the Sept. 9 event "National Career Day" and will open doors three hours early to take applicants.

The huge push is being seen by many as a sign the economy's improved and that there's increased competition among fast-food chains for workers. (Video via Chipotle)

Despite lower-wage industries seeing the biggest share of growth in the economic recovery, widespread strikes for higher wages have made it harder for the chains to hire.

A Chipotle executive told The Wall Street Journal, "The economy has been thawing, more restaurants are opening, and there are fewer job applicants than there were several years ago."

Chipotle didn't say anything about raising its wages, but in an earlier move to attract applicants, last month Chipotle started offering benefits, like tuition reimbursement, to some employees.

Chipotle currently has more than 60,000 employees. If it does hire 4,000 workers on Sept.9, it would increase its workforce by almost 7 percent. (Video via Chipotle)