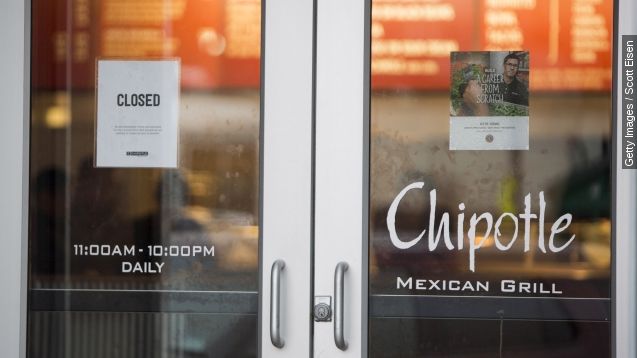 SMS
Chipotle Stores Will Close For A Few Hours For A Companywide Pep Talk
By Briana Koeneman
By Briana Koeneman
January 15, 2016
After the health scares at Chipotle restaurants in late 2015, execs announced all employees would join a companywide discussion about food safety.
SHOW TRANSCRIPT

Chipotle is planning to close all of its stores for a few hours next month for a companywide meeting to discuss its response to issues with E. coli and food safety.

A spokesperson for the chain told The Oregonian the meeting is expected to take place Feb. 8 and will involve all employees. (Video via Chipotle Mexican Grill)

He said in an email to the outlet, "We want to thank our teams for all their hard work, to discuss some of the changes we are making to enhance food safety, to talk about the restaurants role in all of that and to answer some questions from employees."

The news comes after Chipotle executives announced Wednesday they plan to start a marketing campaign next month to win back customers.

Of course, several foodborne-disease outbreaks plagued the chain starting in October of last year that sickened more than 50 people across the country. (Video via WPRI)

Last week, the company said it was subpoenaed by federal authorities as part of a criminal investigation into a different outbreak in California last fall. Several lawsuits have also been filed nationwide by customers who were ill after eating at the restaurants. (Video via Chipotle Mexican Grill)