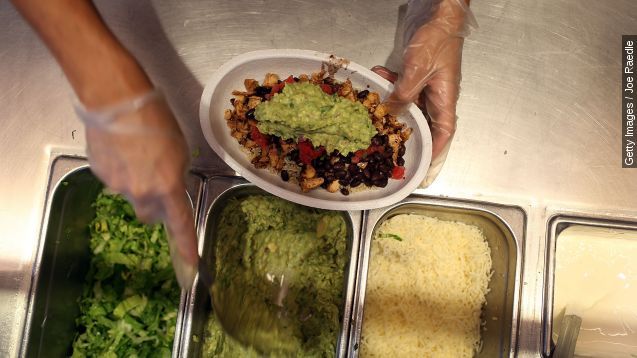 SMS
Chipotle Faces Criminal Investigation After Foodborne Illness Outbreak
By Matt Moreno
By Matt Moreno
January 6, 2016
More than 100 people got sick in several states after a string of illnesses linked to Chipotle restaurants were reported in late 2015.
SHOW TRANSCRIPT

Chipotle Mexican Grill is being subpoenaed by the U.S. Attorney's Office in California.

The subpoena was served to the restaurant last month and relates to the illnesses that started at several of the chain restaurants in late October and early November, the company said in a filing. (Video via Chipotle Mexican Grill)

The lawsuit, brought on the by the U.S. Attorney's Office for the Central District of California, asks the company to produce documents from its Simi Valley, California, restaurant.

Chipotle's been dealing with the E. coli outbreak that started in late October, and a location in Boston had a norovirus outbreak in December. More than 100 people got sick, but there were no reported deaths. (Video via CBS)

"No, I will not come back," one Boston College student told WBZ-TV.

The highly publicized illnesses have sent sales and stocks plummeting.

Chipotle's stock has dropped some 300 points since its peak three months ago before the illnesses were reported.