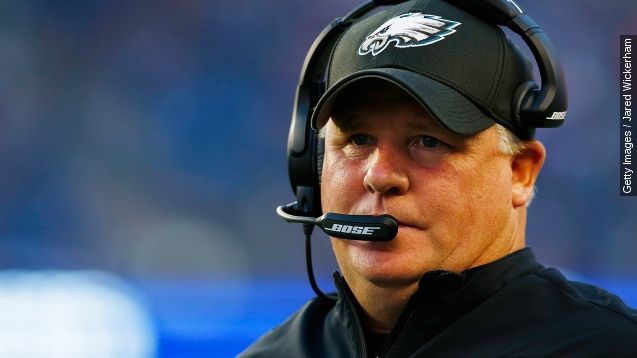 SMS
Chip Kelly Won't Be Returning To Coach College Football
By Matt Moreno
By Matt Moreno
December 30, 2015
The fired Philadelphia Eagles head coach is reportedly trying to stay in the NFL, and the Tennessee Titans could be an ideal location.
SHOW TRANSCRIPT

Chip Kelly's tenure as the Philadelphia Eagles head coach is over after less than three years, but it doesn't sound like the former standout college coach will be leaving the pros.

The former University of Oregon offensive mastermind told Fox Sports' Jay Glazer he wants to remain in the pros. He also said he wants to coach and not be a "personnel guy."

The Trojans eventually hired from within, and the majority of vacant, high-profile college football head coaching jobs are filled by now.

So that leaves two likely options for Kelly — find either a head coaching job or an offensive coordinator job in the NFL. Neither of which should be extremely tough.

If he stays in the NFL, the Tennessee Titans are a likely landing spot.

The Titans just drafted quarterback Marcus Mariota, a player Kelly coached while at Oregon and reportedly tried to get the Eagles to trade up for in the 2015 NFL draft.

There are plenty of other offensive weapons surrounding Mariota, too, including wide receivers Dorial Green-Beckham and Kendall Wright, tight end Delanie Walker, and a young offensive line.

There's also a coaching vacancy there. The Titans fired Ken Whisenhunt as head coach after a 1-6 start, handing interim coaching duties to Mike Mularkey, who hasn't done much to prove he should keep the job long term.

However, a Twitter poll by The Tennessean showed fans were divided on the idea.

At this point, it's still all speculation, but Kelly likely won't be out of a job for long.

The 6-9 Eagles take on the New York Giants in their final NFL game this Sunday.