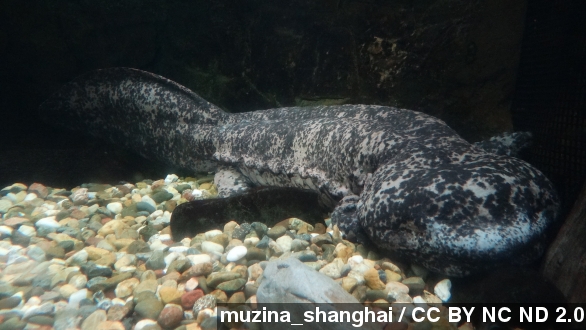 A banquet where Chinese officials reportedly ate a giant salamander appears to be at the heart of a bust-up that left 14 police officers suspended in the country's South.

According to local paper Southern Metropolis Daily, 28 people were involved in the banquet, and the police officers were suspended because they attacked the paper's undercover journalists after the banquet.

The Chinese giant salamander they allegedly ate is critically endangered: Although there aren't any solid population estimates, the EDGE of Existence initiative reports populations of the once-common amphibian have fallen catastrophically over the past 30 years. (Video via Zoological Society of London)

That's due in part to habitat destruction but also unsustainable hunting. The salamander's meat is considered a delicacy.

Chinese President Xi Jinping has discouraged Chinese officials from spending too much money on banquets, urging frugality and austerity instead. (Video via CCTV)

One of the police officers involved in the banquet said the restaurant's salamanders were artificially bred, which is a common claim for restaurants and markets that sell endangered species. (Video via Rhodes College)

But at least in the case of the salamander, a study by Chinese researchers found artificial breeding didn't slow the animal's population decline in the wild, and poached specimens are often sold as being from farms.

Demand in China is one of the driving forces behind the poaching of several endangered species, often either consumed as delicacies or used in traditional Chinese medicine.

Conservationists have blamed Chinese demand for rhino horns as one of the leading factors in the 90 percent decline in wild rhino populations over the past 40 years, and Chinese demand for ivory has also driven elephant poaching. (Video via National Geographic)

Many of these items are considered luxury products, which have seen a spike in demand alongside the country's increasing wealth.

China has enacted new laws to prevent the trade of these illegally obtained products, but critics say the lack of enforcement has rendered the laws mostly ineffective. (Video via ODN)

The regional government in Shenzhen, where the banquet was allegedly held, has promised a thorough investigation into the incident.

This video includes an image from muzina_shanghai / CC BY NC ND 2.0.