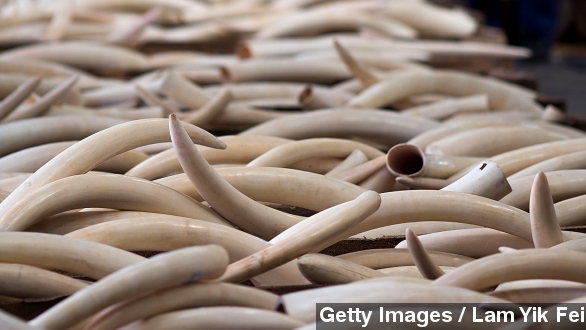 Corruption, criminal syndicates and Chinese officials are all to blame for the spike in poaching that has decimated Tanzania's elephant population, according to a new report.

Citing local traders, the Environmental Investigation Agency alleges during a visit from Chinese President Xi Jinping, Chinese officials bought thousands of kilos of illegal ivory and shipped them in diplomatic bags on their plane. (Video via Voice of America)

LOCAL VIA AL JAZEERA: "When he was here, many kilos go out. Many kilos. Hundreds no? Many kilos. Thousands.

The report also argues the decline in the country's elephant population actually started in earnest in 2005, rather than 2009, and that's particularly disheartening given Tanzania's record.

NICK CLARK, ENVIRONMENTAL INVESTIGATION AGENCY: "In 1989, Tanzania emerged as a global champion for African elephants when it successfully pushed for an international ivory ban. ... Tanzania is now considered to be the largest source of poached ivory in the world."

Poaching has seen a resurgence in the past few years, and a recent report found as many as 100,000 elephants were killed for their ivory in the past three years.

Much of the demand comes from East Asia, China in particular, where ivory carvings are seen as luxury items and highly prized by the country's rapidly increasing middle class.

Many of the efforts to combat poaching have targeted that demand through PSAs featuring Chinese celebrities urging people to stop buying ivory. (Video via WildAid)

For its part, the Chinese government has denied the claims. A Chinese official told The New York Times the EIA's report is "highly irresponsible" because it's "spreading rumors and damaging China's image without any evidence."

The report also blames the Tanzanian government for being too lax with enforcement of anti-poaching measures, with rangers and local police allegedly involved in the trade.

This video includes an image from Feans / CC BY 2.0.