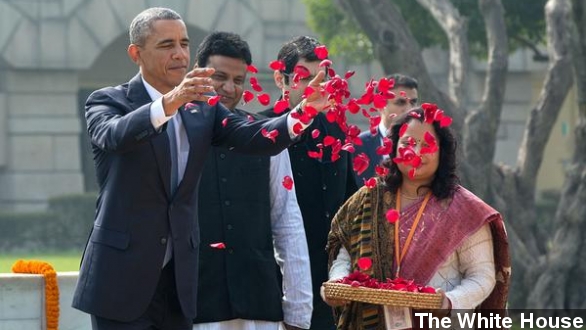 While U.S. media has been focusing on the budding bromance between President Obama and Indian Prime Minister Narendra Modi...

Chinese media have been covering Obama's three-day visit to India much more critically.

India and China have a rough history, full of border skirmishes and rivalry. (Video via BBC)

And the last time Chinese President Xi Jinping visited, his trip was embarrassingly overshadowed by Chinese troops moving across a disputed Himalayan border into India.

Because of all this, the Chinese press is on edge about Obama's visit, which really means the government that controls that press is wary of the visit.

While American and Indian outlets have focused on improved military ties and nuclear deals...

... an op-ed in China's Xinhua says the U.S. and India aren't on the same page about many big issues like climate change, writing, "Economic growth and eradication of poverty is more urgent for Indian officials than cutting carbon emissions."

And that statement isn't wrong. Unlike the success of talks on climate change back in November between Obama and Xi Jinping, Modi and Obama failed to reach a solid agreement to cut emissions.

Another concern in the Chinese press: that Obama's visit is an attempt to further pit China and India against each other.

The U.S. and India have both taken China to task for pushing its borders, especially at sea. And China National Radio warned this week that "America would use India as a counterweight to China."

And the Global Times writes the visit is a trap to get India to help counter China's rise. But the article holds out some hope, urging China and India to move toward "cooperation, instead of contention."