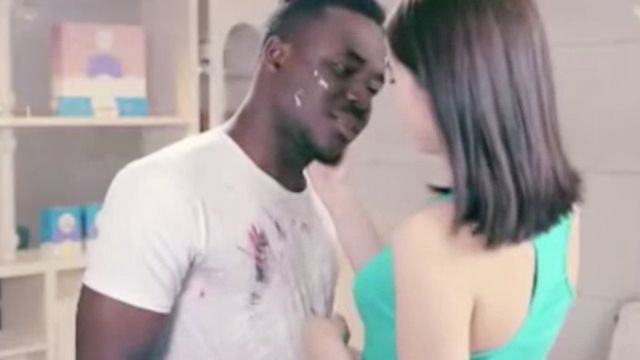 SMS
Chinese Company Says Critics Calling Its Ad Racist Should Lighten Up
By Calvin Stovall
By Calvin Stovall
May 28, 2016
The company responsible for a commercial that is being called "blatantly racist" says the foreign media is "too sensitive."
SHOW TRANSCRIPT

A Chinese company is being called out for "blatant racism" in one of its commercials. The company behind the ad said Friday that critics should lighten up.

A version of the ad has been airing in China since April, but it just went viral in the West.

The female lead starts by summoning a black man who looks like he's just finished painting. She embraces him at first but suddenly pulls back and pushes a detergent pouch into his mouth.

The woman then stuffs the man into a washing machine and sits on top of the lid. The man emerges as a tall, pale-skinned Asian man.

"The foreign media might have been too sensitive," the company's spokesman told China's Global Times.

The ad is similar to an Italian ad from nine years ago with comparably racist overtones. It shows laundry detergent being used to transform a frail white man into a muscular black man, with the tag line: "Colored is better."

The spokesman for the Chinese company claims it only aired a five-second version of the ad, which does not include the black character. He said, "We have no idea why the full version went viral online. ... We meant nothing but to promote the product, and we had never thought about the issue of racism."

The owner of the company told BBC that he didn't recognize the ad's racism until it was pointed out to him: "To be honest, I didn't really pay that much attention to the advertisement."

In December, the black star of 2015's "Star Wars: The Force Awakens" was downplayed in Chinese ads, and this Thai commercial for skin-lightening pills was withdrawn in January after going viral for claiming that "white makes you win."

Beauty standards in many countries value lighter skin, and Eastern Asia in particular has struggled with anti-black attitudes and low numbers of African immigrants. The BBC points out census figures show just 600,000 foreigners live in China out of 1.3 billion citizens.

"It is not a question of Chinese not having anti-racist consciousness. They do," said Barry Sautman, a political scientist at Hong Kong University.