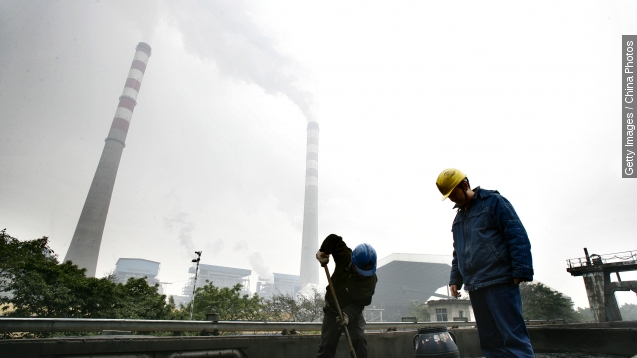 SMS
China Will Set Up A Carbon Cap-And-Trade Market In 2017
By Steven Sparkman
By Steven Sparkman
September 24, 2015
China, the world's biggest polluter, has been building up to a national cap-and-trade plan for years, and has now set a deadline of 2017.
SHOW TRANSCRIPT

The world's biggest polluter is about to make a big pledge.

The New York Times and The Guardian report China is set to announce a national carbon cap-and-trade system due to start in 2017. The plan would make China the world's largest carbon emissions market.

Cap-and-trade systems theoretically give the government the ability to control carbon emissions. They set a total limit for the whole country and issue permits to pollute up to that limit. Companies then buy and trade the permits.

China's announcement isn't totally out of nowhere. The country has been experimenting with smaller cap-and-trade markets for several years. The new plan would more or less just consolidate them.

It's also not surprising that the announcement is happening now. The UN's climate summit in Paris is just over two months away, and countries have been announcing their plans ahead of time. (Video via The White House)