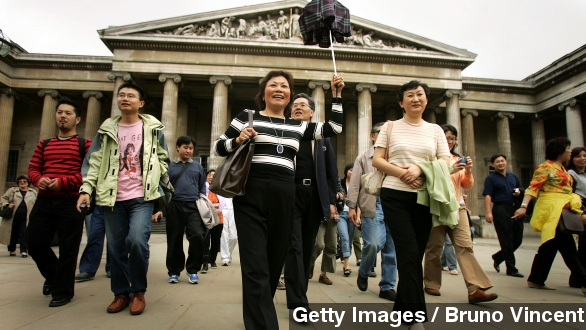 SMS
China To Publicly Shame Unruly Tourists
By Jasmine Bailey
By Jasmine Bailey
January 18, 2015
Concerned about the reputation of Chinese tourists, China's government says it will keep a database of its unruly travelers.
SHOW TRANSCRIPT

Chinese officials are apparently fed up with stories of Chinese tourists going overseas and forgetting their manners.

China's government has issued warnings during the past few months from President Xi Jinping on what not to do  – like these and, well, this.

The Guardian quotes China’s deputy premier blaming “'poor quality and breeding' of the average Chinese tourist. 'They make a racket in public places, carve words at scenic spots, cross the road when the light is red, spit, and do other uncivilised things. ... This is detrimental to the image of the country's people and leaves a bad impression.”

So now the government is warning anyone caught being "uncivilized" while sightseeing will be "publicly shamed" when they return home.

The punishment: vacationers who have a bit of a rep for being ill-mannered will be added to a database overseen by China's National Tourism Administration.

Information from the database will reportedly be shared with hotels, airlines and travel agencies which will in turn make it harder from the ultra rude to travel.

This news does have a few outlets wondering whether such extreme measure are really called for — but honestly, there's been quite a bit of negative publicity about Chinese tourists in the media lately.

For example, "Ding Jinhao was here." Yup, that was an ancient Egyptian temple.

In July 2013, a group of Chinese teens were seen dipping their feet in a fountain at the Louvre. It didn't go over well in China.

Most recently, passengers onboard an international flight from Bangkok to Nanjing were seen throwing hot water and noodles on a Thai stewardess.

These types of incidents haven't gone unnoticed in Western media.

Vice asks whether the Chinese are the new most hated tourists, writing, "All over the world, it seems that the Chinese are becoming the new Americans when it comes to being global reps for vulgarity and rudeness."

Dan Levin for The Washington Post tries to explain the rude behavior, saying, "In the past, few Chinese citizens were able to travel abroad. However, as the country has become both richer and more open, more and more Chinese citizens have taken up the new opportunities."

He cites World Bank data that shows more tourists came from China in 2012 than any other country. But luckily for the Chinese government, there's lots of competition for the stigma of world's worst travelers.

In 2011, a survey from Skyscanner showed the British voted themselves the world's worst tourists.

The next year, Americans admitted it was they who were the worst travelers.

If it's any consolation, with more Chinese tourists comes more money. The U.N. World Tourism Organization​ estimates Chinese tourists spend $102 billion a year. That's ​certainly not something to complain about. ​