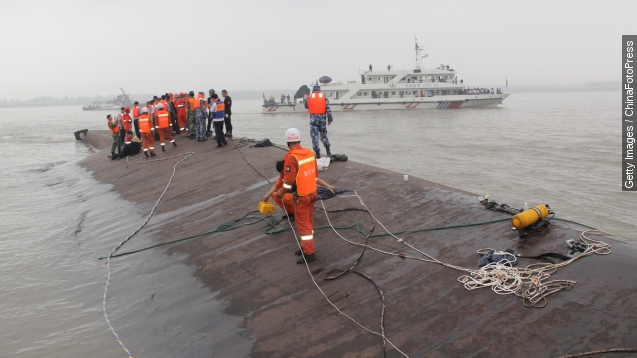 Workers in China began trying to turn over the recently capsized cruise ship Thursday as authorities pledged a transparent investigation into the incident that left dozens dead and hundreds missing.

And there will likely be a lot of focus on just how "transparent" that investigation is. Relatives of some of the victims have already protested over an alleged lack of information coming from authorities.

Accusations emerged that the government is trying to censor independent media outlets in an effort to keep the tragedy quiet.

It's being called the worst maritime disaster China has ever seen. Only 14 of the 456 people on the ship have been recovered alive after the boat turned over during bad weather in the Yangtze River Tuesday.

China Digital Times published actual instructions from the government telling news outlets to recall reporters from the scene immediately and only report on information from "authoritative media," meaning a state-run news agency.

South China Morning Post Managing Editor George Chen said on Twitter that outlets were asked to focus on the "positive part" of the crisis, such as Premier Li Keqiang, China's second in command, listing the names of survivors and leading the search.

Other outlets such as the state-run Xinhua reported on the heroic rescue effort.

There are even reports that the government is trying to scrub mention of the cruise ship from various places around the Internet.

The Los Angeles Times spoke to a woman who said a post asking for information about her boyfriend, who was on the ship, was taken down from the microblogging site Weibo.

We have seen accusations of China suppressing information in times of crisis before, such as with 2008's Sichuan earthquake and a high-speed train crash in 2011.

In a strongly worded editorial, The Washington Post accuses President Xi Jin Ping's administration of outdoing his predecessors in this regard. "Mr. Xi’s regime appears determined to head off such pressure for accountability by suppressing all independent reporting and commentary on the cruise ship from the start."

But a spokesman for China's transport ministry promised a "serious investigation" at the news conference, saying, "We will never shield mistakes and we'll absolutely not cover up anything."

Officials confirmed Thursday 77 bodies have been recovered. At least 360 passengers are still missing.