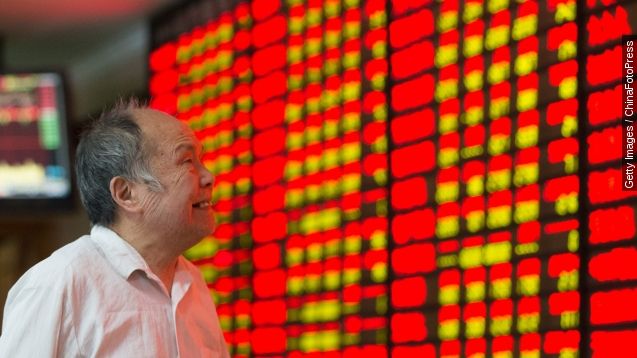 SMS
China's Stock Market Shuts Down For The Day After Falling Too Far
By Grant Suneson
By Grant Suneson
January 7, 2016
China's stock market was halted after 14 minutes on Thursday after a 7 percent dip, triggering a new"circuit breaker" rule that tries to curb decline.
SHOW TRANSCRIPT

On Thursday, China’s stock market went into free fall, dropping 7 percent in just 14 minutes, prompting authorities to suspend trading for the rest of the day for the second time this week.

China opted to shut down its markets thanks to its new so-called circuit breaker rule, which pauses trading if China’s CSI 300 Index goes down by 5 percent and ends it for the day if it dips to the 7 percent threshold.

The idea behind the move was to keep China’s notoriously volatile market from dipping too much, but it seems to have had the opposite effect, creating a rush to sell off shares before the market shut down.

But the China Securities Regulatory Commission has apparently realized its misstep and suspended the circuit breaker rule starting Friday.

It said in a statement, "After weighing advantages and disadvantages, currently the negative effect is bigger than the positive one. Therefore, in order to maintain market stability, CSRC has decided to suspend the circuit-breaker mechanism."

China’s government has been tinkering with its currency a lot lately, devaluing the yuan for eight days straight.

While that could mean cheaper goods for North America and Europe, China’s struggling economy has taken its toll across the globe. Wall Street suffered a 1 percent drop, while European stocks closed down 2 percent.