China's Pollution Problem Is Only Getting Worse 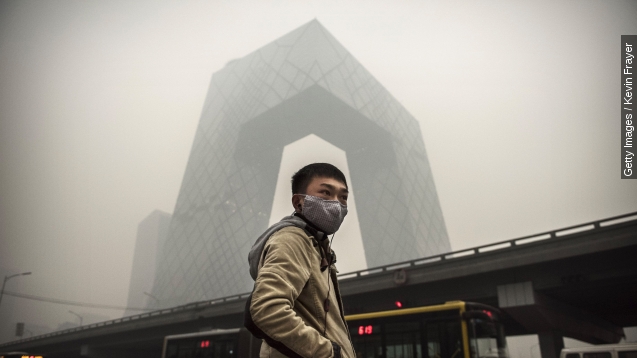 SMS
China's Pollution Problem Is Only Getting Worse
By Grant Suneson
By Grant Suneson
November 9, 2015
China had one of the worst pollution days ever, having more than 40 times the limit that the World Health Organization recommends due to coal burning.
SHOW TRANSCRIPT

Less than a month before almost 200 world powers are scheduled to discuss how to reduce world carbon emissions, China may have broken its own record for the most polluted atmosphere the country has ever seen.

It’s one of the more dangerous forms of contamination because the particles are small enough to go deep into your lungs and find their way into the bloodstream, which can cause heart disease, emphysema and even cancer.

The World Health Organization recommends maximum PM2.5 levels of 35 micrograms per cubic meter, but readings spiked as high as 1,400 micrograms in the northeastern part of the country.

The jump in smog could be due to cold weather. Most of the country still burns coal to power heating systems, and that throws a lot of pollution into the air.

But heating their homes could come at a steep price for the Chinese people. Several hospitals' respiratory wards became packed with patients, and government officials warned citizens to stay inside.

This news comes on the heels of a U.S. Energy Information Administration report that said China had underreported its coal usage by 14 percent since 2000.

But even with the increased scrutiny on China’s emissions, the country still may not be inclined to decrease production any time soon. Chinese officials promised to peak the country's emissions by 2030, which is basically another way of saying they don’t plan on slowing down for the next 15 years.