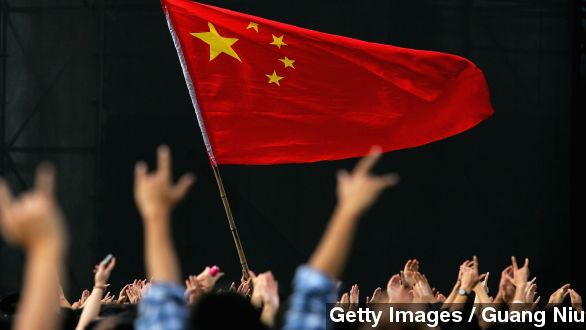 China celebrated its first-ever Constitution Day this week to coincide with the document's thirty-second anniversary. The goal of the celebration? To reinforce the importance of rule of law in China.

ANCHOR VIA CCTV: "On the day's inauguration, Chinese President Xi Jinping has called for more awareness of the Constitution and better understanding of the importance of law."

The day was celebrated as schools held readings of the document and judges were televised swearing an oath to the text. There were also some more ... unconventional celebrations.

A festival in Shanghai screened American films, "The Shawshank Redemption," and "Training Day," to warn against the dangers of corruption and encourage an awareness of the law.

But there were some interesting ramifications to China's Constitution Day that have some critics questioning how diligently the country follows its highest form of law.

Foreign Policy reports the most censored term on China's most popular blogging platforms and message boards was actually the word "constitution" — on Constitution Day.

Even posts that weren't critical of the country's Constitution were blocked, with users being told their content infringed upon legal guidelines.

China's constitution guarantees its citizens the right to free speech, but, as this censorship shows, it doesn't always follow its own rules. So, if China's going to pick and choose what aspects of its constitution it upholds and what aspects it doesn't, why have a Constitution Day in the first place?

It all goes back to party control. The celebration of a constitution day gives the impression of holding those in power accountable. However, a critic of the Communist Party told The Financial Times, "A single document or phone call from the party can override the constitution. The judicial organs are the handle on the party’s knife."

It's not an uncommon tactic. Like China, Uzbekistan has its own Constitution Day. Yet, the government has been accused of various forms of censorship, including jailing a journalist on what critics have called "trumped up" drug possession charges.

Uzbekistan's constitution guarantees freedom of expression and explicitly prohibits censorship. But, according to Freedom House,  the 63-year-old detained journalist was not released from prison despite the Uzbek government's plan to release all prisoners over the age of 60 on the country's Constitution Day in 2013.

This year's Constitution Day celebrations occurred right after the end of China's fourth plenum under President Xi. The president emphasized the importance of rule of law during his term. (Video via Arirang)

This video includes am image from Getty Images.