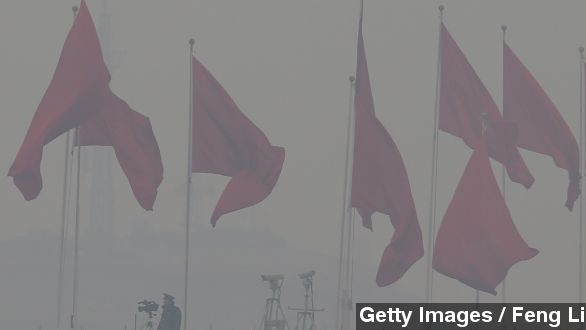 A damning documentary about China's unsafe levels of air pollution has been taken offline by the government's propaganda department.

The film, "Under The Dome," was funded and produced by former CCTV journalist Chai Jing. She says in the film she hadn't paid much attention to China's pollution problem until her daughter was born with a benign tumor. (Video via Linghein Ho)

Chai sought to figure out how China's pollution problem got so bad and what the country can learn from other cities to curb its pollution.

Western media outlets reported "Under the Dome" could start an environmental revolution in China. The film was compared to Rachel Carson's 1962 book "Silent Spring," which revealed the dangers of pesticide use.

NPR reports China's new environment minister actually called Chai to thank her for her work. One expert told the outlet he expected Chai's work to make it past the censors, since it struck a positive, hopeful message. (Video via CBS)

It's not clear what prompted China's propaganda department to censor "Under the Dome." But that hasn't stopped theories from circulating online.

According to The New York Times, some speculated the film was released so the environmental ministry could put pressure on China's government to support greater regulation of state-owned enterprises – but that's been called a conspiracy theory by a friend of Chai's.

But it's not like China's trying to hide its pollution problem. The nation has made moves to curb pollution, including signing an agreement with the U.S. that would require both countries to lower carbon emission production.

And the Times reports China's state news agency tweeted Friday, "President Xi Jinping vows to punish, with an iron hand, any violators who destroy ecology or environment, with no exceptions."

Chai said in an interview that she used 160,000 U.S. dollars of her own money to finance "Under the Dome." Before it was pulled, the documentary was viewed more than 200 million times.