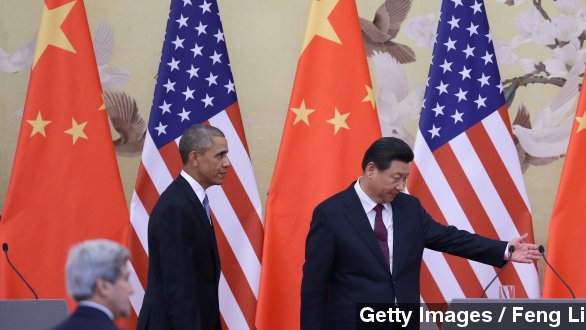 SMS
China Overtakes U.S. As World's Largest Economy Yet Again
By Matt Picht
By Matt Picht
December 6, 2014
New data from the IMF shows China's adjusted GDP has surpassed Americas, but some people are skeptical about the agency's calculations.
SHOW TRANSCRIPT

According to the financial world, it's time to brush up on your Mandarin. China has officially surpassed the U.S. to become the world's largest economy. Again.

That's according to new data from the International Monetary Fund, which released a report in October comparing an adjusted GDP of various countries. The IMF says China will produce $17.6 trillion this year, ahead of the $17.4 trillion made by the U.S.

The news is making the rounds now thanks to this Marketwatch article titled "It's Official: America is Number 2." The piece notes that "For the first time since Ulysses S. Grant was president, America is not the leading economic power on the planet," and predicts the news will herald "a geopolitical earthquake with a high reading on the Richter scale."

Seems a little scary when you put it that way, so why isn't this getting more attention? Well, it's probably because we've heard this all before.

It's long been conventional wisdom that China's rapidly growing economy would someday bypass the U.S., and alarming headlines about China's new global economic dominance have been around for years. (Video via Euronews)

Case in point: Marketwatch published a counterpoint to its previous article, which argues China's still lagging behind in terms of per capita GDP. The kicker? This article was originally printed back in May, just after the IMF released a similar report.

And of course, there's always the old standby when it comes to economic bad news: if you don't like the numbers, claim they're made up. In this case, the IMF's method for calculating GDP, which relies on something called "purchasing power parity."

PPP is often used in order to adjust for overvalued or undervalued currency. So while China's actual GDP is still far below America's in terms of dollars, that GDP gives China slightly more buying power since prices in the country are relatively lower.

But as Peking University professor Michael Pettis wrote back in March, the IMF's calculations assume both the U.S. and China measure their GDP in the same way — and China's approach to measuring their debt might result in slightly inflated GDP numbers.

One interesting side note; China has previously discouraged the IMF from crowning them as the number one economic power. And that might be because an impending economic slowdown has the country's leaders worried they might not be number one for long.