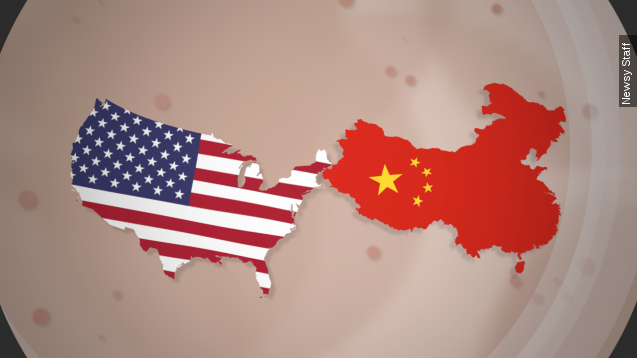 SMS
China Isn't Going To Pass The US In Science Any Time Soon
By Steven Sparkman
By Steven Sparkman
January 7, 2016
China keeps putting more money toward its science budget, but it still has a long way to go before it threatens the U.S.' science dominance.
SHOW TRANSCRIPT

China is positioned to overtake the U.S. as the world's science leader — but it has to solve a few problems first.

A decade ago, China's then-president Hu Jintao laid out a plan to turn the country into a scientific heavyweight by 2020. The plan called for huge investments in science and technology. (Video via CCTV)

Since then, we've seen China spend a higher and higher percentage of its GDP on research and development while the U.S. has kept its levels fairly steady. Which means we've been hearing a lot of this:

"We are still the leader, but not by a lot. And I can't help but point to China in particular. In another four or five years, they will be spending more in absolute dollars than we are," Francis Collins, head of the National Institutes of Health, told PBS.

If you look at most predictions the next decade, China's rise to the global leader in science comes across as a near certainty.

For instance, China now publishes more scientific papers in top journals than any country aside from the U.S. It's also outspending all of the European Union on research and is closing in on the U.S., with science budgets going up by double-digit percentages every year. (Video via CCTV)

And while the U.S. is still miles ahead of China in annual science funding, the Organization for Economic Co-operation and Development predicts the two will switch places soon.

Over and over, the U.S.'s dominance in science is said to be on its last legs.

But those numbers don't tell the whole story, which is that China still has a long way to go.

For one thing, Chinese research has a bad reputation. Stories on China's staggering level of fraud, like plagiarism and skirting the peer review process, go back years.

For instance, Scientific American sent a Chinese-speaking reporter undercover in 2014, and that reporter was offered the chance to buy authorship on a paper that would run in a prestigious journal.

These aren't just accusations from outsiders, either. In 2010, two Chinese researchers wrote a letter in the journal Science listing the ways fraud and cronyism were "slowing down China's potential pace of innovation." (Video via BBC)

Critics say China's system actually incentivizes fraud. Chinese scientists are rewarded based almost solely on publication count, so doing anything possible to up that count can make or break careers.

The Chinese government is trying to combat this image. Chinese news outlets have started running stories shaming scientists who commit fraud. Chinese teachers have also been emphasizing the importance of ethics to their students. (Video via Beijing TV, Beijing University of Technology)

The government has also announced penalties for scientists who commit fraud, and the country's major research institute says it will start demanding its money back if it finds out it's been funding unethical labs.  (Video via CCTV)

And even if it does stamp out its fraud problem, China's research output still isn't as influential as it seems.

China ranks 29th on the U.N.'s Global Innovation Index. And while China puts out 10 percent more papers than Germany, which is No. 3 in scientific output, it has to spend three times as much money to do it.

But even if China's science dominance is a little overhyped for now, that doesn't mean the U.S. can rest easy if it wants to stay on top.

If China gains a reputation as a place where young scientists can start their career, that could hurt the U.S.' competitive edge.

"China is saying, 'Come on back. The water's fine in China. We'll give you a laboratory, we'll give you whatever you want,'" physicist Michio Kaku told C-SPAN.

U.S. lawmakers seem to be getting the hint. The 2016 budget includes a $2 billion budget increase for the National Institutes of Health and more funding for a number of other scientific agencies. (Video via C-SPAN)