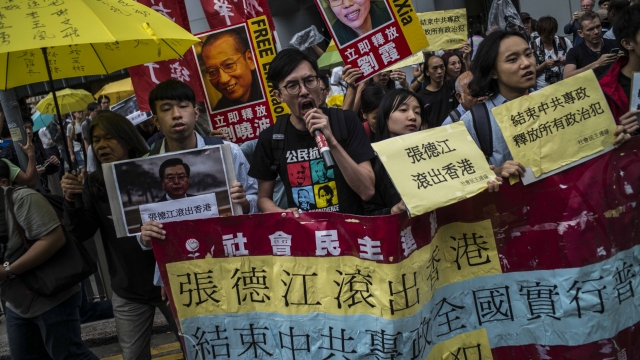 SMS
China Hates Democracy So Much It Warns People Not To End Up Like Syria
By Melissa Prax
By Melissa Prax
August 4, 2016
China is blaming the U.S. for pro-democracy movements in Taiwan and Hong Kong.
SHOW TRANSCRIPT

China says the looming "shadow" of the U.S. is trying to undermine its political stability.

And China has a warning for its neighbors: Those pursuing independence could create the next Syria or Iraq.

SEE MORE: On The Anniversary Of Tiananmen Square, China Scrubs Away Its History

Responding to pro-democracy movements in Hong Kong and Taiwan, China released this propaganda video, which told protesters to cut it out because they were putting the country's future at risk.

The video claims some of these movement leaders are getting their cash flow from the U.S.

His party was quick to deny the claims.

And while the U.S. was the main country criticized in the video, it's not the only one. Japan and the Philippines were also called out next to a spread of images of the South China Sea.