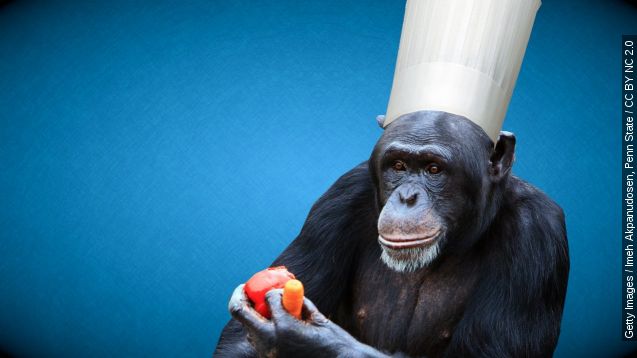 Would you eat a meal cooked by one of these guys? We would. 'Cause we like to walk on the wild side.

And research published in Proceedings of the Royal Society B says eating a chimp-made-meal is possible! — at least in theory.  (Video via National Geographic)

"No one actually gave the chimps an oven ... They tested the chimps in a variety of situations over two separate seasons," James Gorman, a New York Times science writer, said.

In the study, researchers had two slices of sweet potatoes — one raw and one cooked. They would give the chimps a raw slice. The chimps then learned if they put that raw slice in what was essentially a magical bowl, it would come out cooked.

The researcher would shake the bowl after the chimp put a raw sweet potato slice in it. There was a cooked slice concealed in a separate bowl that was then given to the chimp.

The chimps preferred the cooked food and would wait for it to cook. Yes, chimps have the propensity to be chefs.

Anyone else think that's a bit of a stretch? Let's get into the science of it.

Researchers did different experiments, nine total, with a different number of chimps each time. Once researchers found chimps like cooked food in one experiment, they introduced different "cooking" devices in another experiment. (Video via Animal Planet)

In yet another experiment, to really drive the point home, researchers tested the chimps themselves to see if they could "cook" the food on their own by putting it into the right device. In most cases, they were able to.

This is a big deal because, as the researchers write, chimps have a hard time giving up food they already have. In these instances, they would give up the food ... just so that it would taste better.

It sounds like at the next family cookout you may want to invite one of human's closest cousins, too.

This video includes images from Getty Images and Penn State / CC BY NC 2.0.