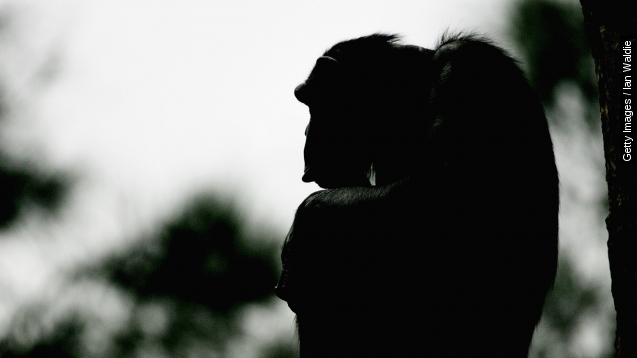 SMS
Chimpanzees Like Drinking 'Alcohol' Too
By Evan Thomas
By Evan Thomas
June 10, 2015
A 17-year study found chimpanzees will seek out and drink the alcohol in fermenting tree sap, but they don't appear to get drunk.
SHOW TRANSCRIPT

Researchers have found some chimpanzees in West Africa are habitual drinkers.

The 17-year study marks the first observations of repeated and habitual alcohol consumption by any wild ape.

Researchers observed chimpanzees using wadded-up leaves as sponges to drink raffia palm sap, which turns into an alcohol when it ferments. The sap is about 3 percent alcohol by volume, roughly equivalent to a really light beer. (Video via The Royal Society)

One researcher told the BBC "Some individuals were estimated to have consumed about 85 mL of alcohol" per visit, or an amount “[approximately equal to a bottle of wine]".

And while the researchers observed altered behavior in some chimpanzees after drinking, they say it's not clear if they got drunk in the traditional human sense.

Importantly, they say there's no concrete evidence of this behavior in the wild. Chimps need humans to start the process.

The researchers wrote, "Raffia palm sap drinking is opportunistic, relying on a person having installed the specialized equipment to drain the sap from a mature palm."

Still, the study supports what’s known as the "drunken monkey" hypothesis: that some 10 million years ago, a common ancestor to humans and other primates evolved the ability to metabolize alcohol more effectively than other animals.

Not like moose. There's evidence moose in Norway might sometimes get drunk after eating piles of fermenting fruit, which could explain the shoe shopping. (Video via National Geographic)

Lorikeets are lightweights, too. (Video via National Geographic)

But not certain tree shrews. One study found they can drink enough to get a human tipsy, but they don’t appear to feel it. (Video via Proceedings of the National Academy of Sciences)

Of course, even primates have their limits. In the Caribbean, some vervet monkeys who steal human alcohol show the apparent universal signs of intoxication. (Video via BBC)

Maybe they should take notes on the chimpanzees’ moderation. The new findings have been published in Royal Society Open Science.

This video includes images from Getty Images and M. Nakamura / CC BY 4.0. Music by Kratos Himself / CC BY NC SA 3.0.