Chimp Violence Study Renews Debate On Why They Kill 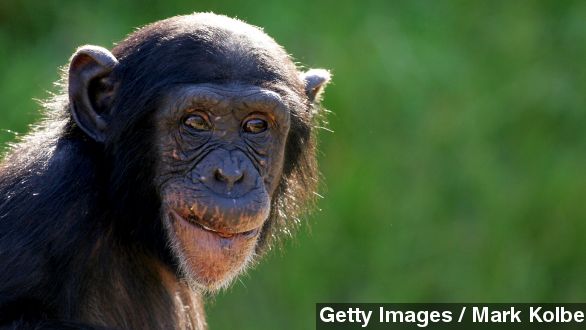 SMS
Chimp Violence Study Renews Debate On Why They Kill
By Christian Bryant
By Christian Bryant
September 17, 2014
The study weighs in on a debate over whether chimps are naturally violent or become that way due to human interference in the environment.
SHOW TRANSCRIPT

Mark Twain couldn't have been further from the truth when he wrote in an essay, "Man is the only animal that deals in that atrocity of atrocities, War."

Scientist and chimpanzee expert Jane Goodall documented that humanity's relatives could commit acts of violence against each other when, back in the '70s, she detailed a conflict between chimpanzee communities in Tanzania.

"We used to think it was only humans who waged war, but we find that chimpanzees, like humans, have this rather unpleasant ability to create an in-group and an out-group."

And a new study published online in the journal Nature Wednesday is renewing the debate on why chimpanzees injure, maim and even kill other chimps.

The study examined instances of violent behavior in chimpanzees and bonobos — species believed to be the closest relatives of humans — to see whether that behavior occurs naturally or is instead the result of human interference. (Video via BBC, National Geographic)

They wrote in their study, "Variation in killing rates was unrelated to measures of human impacts" — or, humans had little or nothing to do with the rates at which chimpanzees attacked and killed each other.

Study co-author and organizer Michael L. Wilson from the University of Minnesota told Discovery most killings were gang attacks and males were the most frequent attackers and victims.

But other scientists say the study's results aren't conclusive, with many questioning how the information was collected. One anthropologist from Washington University in St. Louis told Science, "I am surprised that [the study] was accepted for publication.”

Aside from the evolution-vs.-human-interference debate, there's also disagreement on what implications this study has about human behavior.

But a writer for Nature not associated with the study commented, "Humans are not destined to be warlike because chimpanzees sometimes kill their neighbours."

Wilson and his study's critics both agree you can't jump to conclusions about why humans fight based just on these findings.

This video includes a images from Daniel / CC BY NC 2.0 and Getty Images.