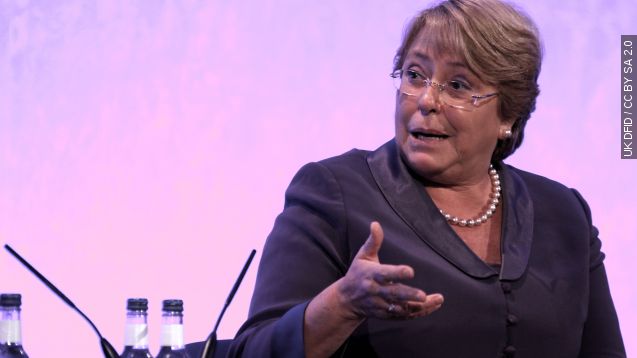 To fulfill an election promise, Chilean President Michelle Bachelet is scrapping her country's constitution and starting over.

Bachelet announced she's starting a constitutional reform process that's expected to take several years. The first step is a "civic education" information campaign, which runs from now until March 2016, followed by a "process of dialogue." (Video via 24 Horas)

Chile's current constitution was formed in 1980 under the rule of military dictator Augusto Pinochet. It's since gone through heavy revisions, but critics say the document's undemocratic origins undermine its legitimacy. (Video via PBS)

Drawing up a new, fully democratic constitution was one of several reform promises that propelled Bachelet to re-election: She won 62 percent of a runoff vote in 2013.

But thanks to a slowing economy and a political scandal, Bachelet's public approval has soured. Last month, a Chilean polling organization recorded support for Bachelet at just 20 percent. (Video via United Nations)

Keeping her pledge about the constitution could win Bachelet back some support. But she probably won't be in office long enough to enjoy the new constitution — the draft isn't slated to reach Congress until 2017, just one year before her term is up. (Video via The Guardian)