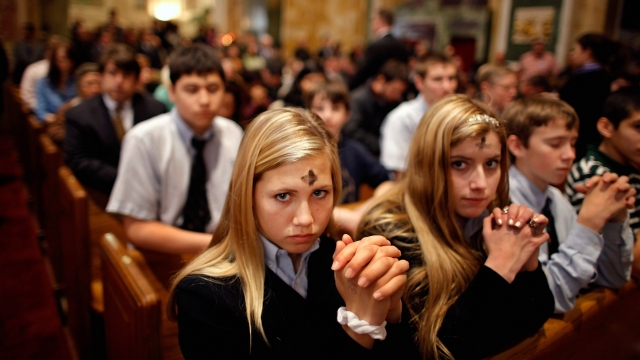 SMS
Keeping The Faith Might Be More Difficult If Your Parents Are Divorced
By Grant Suneson
By Grant Suneson
September 27, 2016
A new study suggests people who grew up with divorced parents are less likely to be religious.
SHOW TRANSCRIPT

Much has been said about younger Americans tending to shy away from religion in much greater numbers than previous generations, but now, researchers think they may have found the culprit.

A new study from The Public Religion Research Institute found that, if you want your children to stay in church, it helps to stay with your spouse.

SEE MORE: Religion Is Worth A LOT To The Economy

Some researchers and theologians believe the strain of splitting a family can make it tough for kids to keep the faith. If they see the church fail to keep their parents together, they might not rely on it for other struggles they encounter in life.

Luther Seminary professor Andrew Root told The Washington Post, "Everything in a divorce gets divided. Literally everything. … Everyone takes sides. Even religion takes sides. The church gets divided. Dad leaves Mom's faith, or vice versa. Negotiating those worlds becomes difficult."

Now, just because you're "religiously unaffiliated," that doesn't necessarily mean you're not religious. About 18 percent of that group still says religion is important to them — they just don't associate themselves with a particular religion.

It will be interesting to see whether those percentages stay closely linked. The divorce rate for couples who wed in the '90s are much lower than those in the '70s and '80s. But we'll have to wait years to find out if the kids those marriages produced follow in the faith footsteps of their families.