Children Of 9/11 Want To Focus On The Future 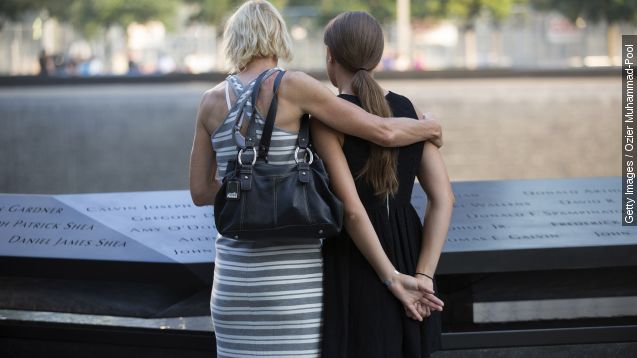 SMS
Children Of 9/11 Want To Focus On The Future
By Katie Link
By Katie Link
September 8, 2015
They say time heals all wounds. But for the more than 3,000 kids who lost parents in the 9/11 attacks, time just moves them to a new phase of life.
SHOW TRANSCRIPT

Some children learned about the events of Sept. 11, 2001, from parents or teachers. Others saw it unfold on TV. (Video via NBC)

But for about 3,000 children, it was the day their parent never came home. The media named them the "children of 9/11."

"This just in — you are looking at obviously a very disturbing live shot there. That is the World Trade Center and we have unconfirmed reports this morning that a plane has crashed into one of the towers," a CNN reporter said. (Video via CNN)

Fourteen years later, the skyline in New York City looks different, hearts are healing and some of those children are now young adults.

And many of them want to focus on the future.

Gina DiFazio was 10 years old when she lost her dad in the attack on the World Trade Center. She told NJ.com, "People were so worried about it defining us as human beings. There are so many more things I've done since then."

Some of the 300 kindergartners who lost parents to the terrorist attacks are now spread out on college campuses across the nation. (Video via University of Oregon)

About 100 of them are starting college with full scholarships from The Families of Freedom Scholarship Fund, one of multiple financial aid programs founded to support children of 9/11 victims.

Laura Williamson is one of those scholarship recipients. She embarked on a new journey at the University of Tampa in 2014. Her father, a New York police detective, died of pancreatic cancer in 2007, and she says his illness was caused by his work at ground zero after the attacks. (Video via University of Tampa)

Williamson told The New York Times, "I'm never going to forget what happened, but especially being in Florida now, a new environment, and meeting all new people, it's a new start."

This video includes images from Getty Images and Holmes Palacios / CC BY 2.0.