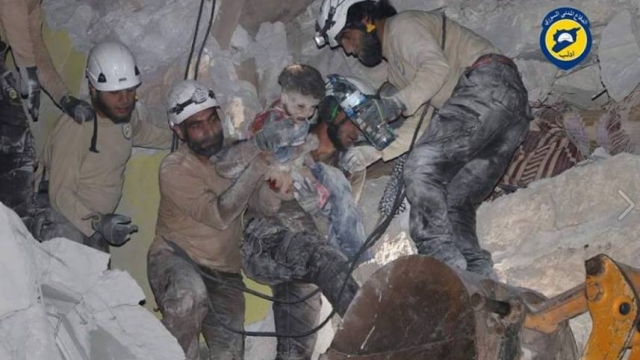 SMS
Child Pulled From Rubble Alive After Airstrikes Hit Northern Syria
By Jake Godin
By Jake Godin
May 31, 2016
Ten airstrikes have killed at least 23 people, seven of them children, in Syria's rebel-controlled north, according to monitoring groups.
SHOW TRANSCRIPT

Airstrikes hit the Syrian city of Idlib Monday night. This child was pulled from the rubble alive, but that wasn't the case for everyone.

The Syrian Observatory for Human Rights said more than 10 airstrikes took place. At least 23 people are dead so far, including seven children. The death toll is expected to rise.

Idlib was captured last year by a coalition of rebel groups. One of them was Jabhat al-Nusra, Al-Qaeda's Syrian affiliate.

Al-Nusra was not included in a U.S./Russian-backed ceasefire between the regime and rebels.

But civilians near areas they control are still at risk of being hit by airstrikes — even though some of those civilians have been protesting al-Nusra for weeks.