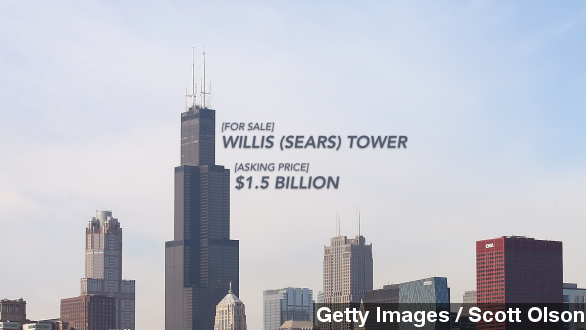 SMS
Chicago's Iconic Willis (Sears) Tower Goes Up For Sale
By Jake Godin
By Jake Godin
March 4, 2015
The iconic Willis Tower (or Sears Tower, for you hard-liner Chicagoans) is going up for sale, and it could reportedly sell for up to $1.5 billion.
SHOW TRANSCRIPT

Chicago's iconic Willis Tower, known as the Sears Tower until its name was changed in 2009, could reportedly be sold for as much as $1.5 billion. (Video via Ben Seese / CC BY NC SA 2.0)

Multiple reports say Joseph Chetrit and Joseph Moinian, the New York-based investors who own the building, have hired Eastdil Secured to broker a deal for the 110-story skyscraper.

A source even told the Chicago Tribune on Tuesday the tower might already have a buyer.

So why sell America's second-tallest building? Having bought the tower in 2004 for a cool $840 million, it turns out now might actually be a good time for the owners to sell.

It's not exactly easy trying to unload a building as big as Willis Tower. The vice president of Chicago-based Appraisal Research Counselors told Bloomberg though it might dominate the Chicago skyline, its construction style is out of date.

But according to Crain's Chicago Business, Chicago's downtown building sales are at their highest in seven years. The business journal also notes whoever buys Willis will get some major tenants, too. (Video via Michael Ambjorn / CC BY NC SA 2.0)

That includes United Airlines, which has a little over 857,000 square feet leased, and the law firm Schiff Hardin, which leases about 218,000 square feet.

As for whether the name will change again, Chicago's WLS-TV is thinking no.

"Now, any number of changes could come if this property changes ownership. Chances are we aren't going to see the name change again. Some of us are still calling it Sears Tower; we refuse to call it Willis Tower," said WLS-TV's Tanja Babich.

A Willis (or Sears) Tower spokesperson declined to comment on the reported sale.

This video includes images from Getty Images and music by smilingcynic / CC BY SA 3.0.