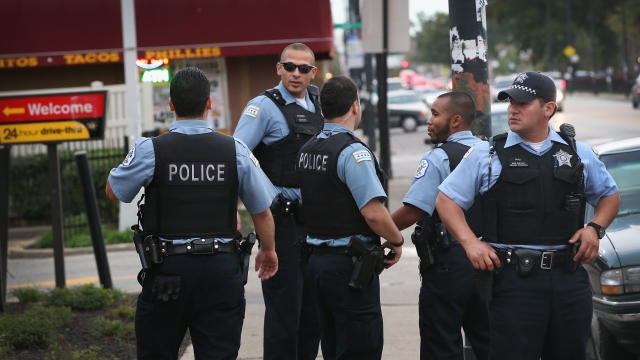 SMS
Chicago Police Blame 'ACLU Effect' For Murder Spike
By Grant Suneson
By Grant Suneson
February 1, 2016
Some Chicago police officers are blaming the "ACLU effect" for increased homicides, saying more oversight makes it hard for them to do their jobs.
SHOW TRANSCRIPT

In January 2016, Chicago saw more homicides than any other month since 2000. There were 50 murders in the city throughout the month, up more than 75 percent from the same time last year.

Chicago’s interim police superintendent blamed the violence on "gang conflicts and retaliatory violence," but police on the street are pointing the finger at the American Civil Liberties Union.

The Chicago Sun-Times spoke with several Chicago police officers who blame what they call the "ACLU effect" for the spike. Police said the advocacy group’s request for stricter supervision of police makes it harder for them to do their jobs.

Under a deal the ACLU made with the Chicago Police Department, officers must fill out more detailed paperwork any time they stop a citizen for any reason. Those so-called "contact cards" will then be reviewed by a retired judge to see if anything illegal happened.

The ACLU made a point of determining the race of each person who was stopped, since a report released last year said that "black Chicagoans were subjected to 72 percent of all stops, yet constitute just 32 percent of the city’s population."

The advocacy group disagreed that the uptick in murders was related to the increased scrutiny and said other areas of the country didn’t see any added violence when police stops were reduced.

Chicago Mayor Rahm Emanuel says the increased attention on police, stemming from high-profile police brutality cases in cities like Ferguson, Missouri, Baltimore and Chicago itself have made officers rethink each interaction they have.

In 2015, Emanuel told U.S. Attorney General Loretta Lynch police "have pulled back from the ability to interdict. … They don’t want to be a news story themselves, they don’t want their career ended early, and it’s having an impact."

And the numbers certainly reflect that. In January of 2016, there were 79 percent fewer contact cards filled out than the same time last year.

Chicago police aren’t the first to blame increased scrutiny for spikes in crime. New York City Police Commissioner William Bratton blamed what he called the "YouTube effect," meaning his officers shied away from policing tactics they would normally use for fear of being recorded on camera.

But in New York City, the ACLU effect is nowhere to be found. The city’s stop-and-frisk policy was scaled back, and as for murders, the homicide rate went down 26 percent last month in comparison to January of 2015.