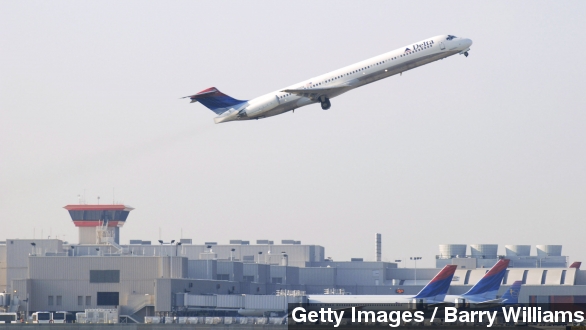 SMS
Chicago O'Hare Takes Back 'Busiest U.S. Airport' Title
By Evan Thomas
By Evan Thomas
January 22, 2015
Chicago’s O’Hare International Airport is once again the busiest airport in the U.S., at least when ranked by plane departures and arrivals.
SHOW TRANSCRIPT

Chicago's O'Hare International Airport is once again the busiest air traffic hub in the U.S. — at least by one metric.

"When passenger and cargo traffic are combined, congratulations are in order again for Chicago. O'Hare back on top for the first time in a decade," said NBC's Brian Williams.

The metric that gave O'Hare its crown back was flight operations, which the Federal Aviation Administration defines as either a takeoff or a landing on an airport's runways.

O'Hare saw more than 880,000 flight operations in 2014, edging out Atlanta's Hartsfield-Jackson International Airport, which took the top spot in 2005.

But planes aren't the only thing moving through airports. If you look at the numbers of people traveling, Atlanta is still top dog. (Video via WLS-TV)