The Longest Championship Drought In Baseball Is Finally Over 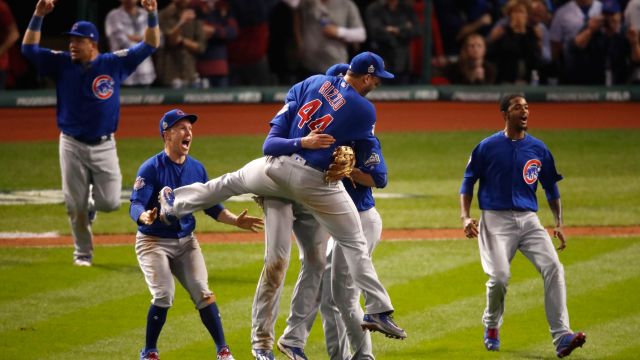 SMS
The Longest Championship Drought In Baseball Is Finally Over
By Ryan Biek
By Ryan Biek
November 3, 2016
The Chicago Cubs beat the Cleveland Indians in Game 7 of the World Series to clinch their first title since 1908.
SHOW TRANSCRIPT

Chicago will be flying the "W" for a long, long time. The Cubs won the World Series on Wednesday night — the team's first championship win since 1908.

Playing on the road, the Cubs beat the Cleveland Indians 8 to 7 after forcing Game 7.

Game 7 was an instant classic, going into extra innings after the Cubs all-star closer Aroldis Chapman blew a three-run lead in the eighth.

SEE MORE: No Matter What, A Huge World Series Drought Is Ending

Long known as the "lovable losers," the Cubs were considered rock stars in Chicago just for getting to the World Series. The team hadn't done that since 1945.

But the Indians took a commanding lead in the series, three games to one. The Cubs had to win three games in a row to win the title — made even more difficult by the Indians' elite pitching.

In more than a century of championship games, only five teams have ever come back from a 3-1 World Series deficit.

Well, the Cubs just made it six.