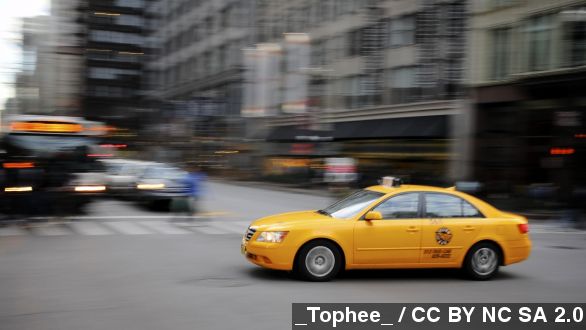 Chicago taxi drivers are revolting against Uber. (Video via City of Chicago)

The drivers staged a boycott for four hours Tuesday morning to protest ride-sharing services like Uber. (Video via WFLD)

It's the latest sign of increasing tension between taxis and ride-sharing services, which fall under fewer regulatory constraints than traditional cabs. That, according to Chicago taxi drivers, is unfair. (Video via Uber)

Another driver told WFLD: "We don't want UberX on the streets anymore. If they want to drive, they should be regulated like we are."

Chicago taxi drivers are far from the only ones staging ride-sharing protests. (Video via City of Chicago)

In October, D.C. taxi drivers staged their own protest.

And international strikes, such as this one in Berlin, are frequent.

Endless honking, traffic jams and refusal of service — doesn't exactly sound like the best way to sway customers to your side of a debate. But that's not the point.

Speaking to WBBM, one Chicago cabbie says the goal is to instead "force a conversation with the city about UberX, and the ride-share industries, who are in the process of decimating the taxi industry."

An example of that damage can be seen in Uber's home city of San Francisco, which experienced an almost 65 percent drop in average monthly taxi rides between March 2012 and July 2014.

But charges made against Uber drivers for sexually assaulting their customers, including in Chicago, have stirred up concern about how safe the services are to use.

Incidents like those are leaving cabbies wanting either more regulations for ride-sharing companies or less regulations for themselves. In many cases, like in Indianapolis or Chicago, regulators are demanding those companies address security issues before operating in their cities.

This video includes an image from Getty Images and Thomas Hawk / CC BY NC 2.0 and music from Chris Zabriskie / CC BY 3.0.