Check The Stats: Tim Duncan Is One Of The Best NBA Players Ever 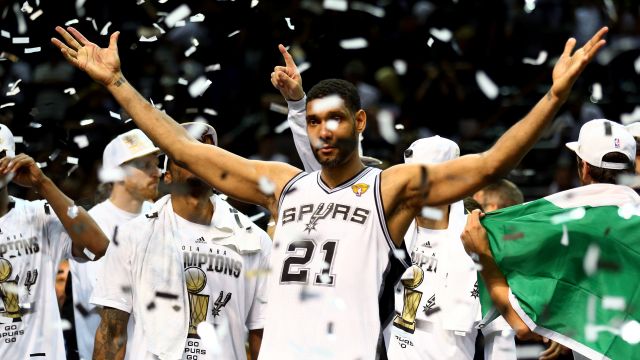 SMS
Check The Stats: Tim Duncan Is One Of The Best NBA Players Ever
By Jamal Andress
By Jamal Andress
July 11, 2016
Duncan never played for anyone but the Spurs, and during his 19 seasons, he became the team's all-time leader in points, rebounds, blocks and games.
SHOW TRANSCRIPT

Tim Duncan retires as the best power forward to play the game of basketball — by a lot.

His first year in the NBA, Duncan walked away with Rookie of the Year honors after averaging a double double — 21 points and 12 rebounds.

And Timmy must've liked the Champagne showers, because he would go on to win four more NBA championships and two more finals MVP awards.

Duncan never played anywhere but southwest Texas, and during his 19 seasons, he became the Spurs' all-time leader in points, rebounds, blocks and games played.

And what would a star player be without his coach? Tim Duncan has played for Gregg Popovich his entire career, and there is no coach-player combo in NBA history with more wins.

Duncan's Spurs haven't missed the playoffs during his entire 19 years in the NBA — not once. That's good for the best winning percentage in not just the NBA, but also the MLB, NFL and NHL. Duncan's consistent greatness is the best you can find in the four major sports.