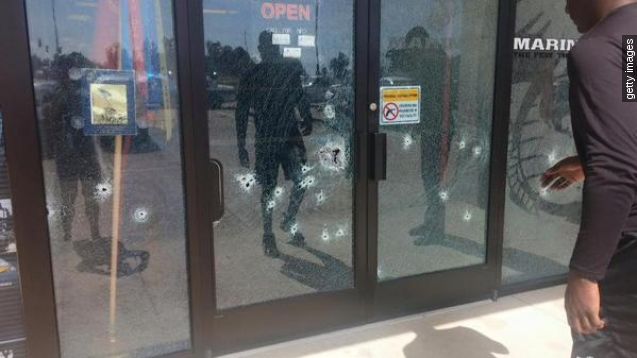 Authorities in Chattanooga, Tennessee have identified the suspected gunman in Thursday’s attacks on military centers.

An unnamed U.S. official identified the shooter as 24-year-old Muhammad Youssef Abdulazeez. The Chattanooga Times-Free Press, citing information from that official, reports the shooter was born in Kuwait and attended college at the University of Tennessee-Chattanooga. (Video via WRCB)

Abdulazeez is believed to have carried out two shootings at a Navy reserve center and a Marine recruiting station in Chattanooga, Tennessee which left four Marines dead and a police officer wounded. (Video via WTVC)

“He is Dennis Pedigo. A 16-year veteran of the force. He was rushed to Erlanger, he had surgery and is said to be in stable condition,” WDEF reported.

Chattanooga Police confirmed about 1:15 p.m. local time the shooter was dead and it was no longer an active shooting situation.

Chattanooga State Community College and Lee University both went on lockdown after the shooting.

The shooting is still under investigation by the FBI.