Chase Utley Respectfully Traded From The Phillies To LA Dodgers 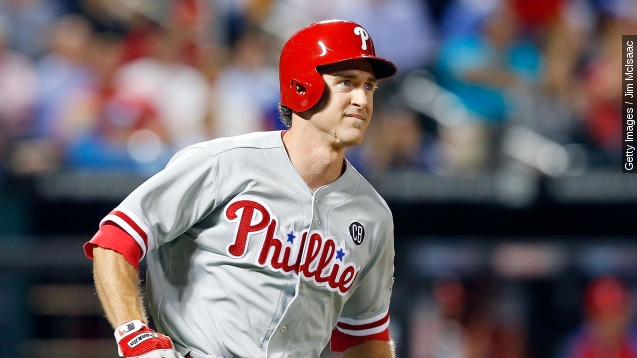 SMS
Chase Utley Respectfully Traded From The Phillies To LA Dodgers
By Matt Moreno
By Matt Moreno
August 20, 2015
Utley, 36, was traded to the Dodgers Wednesday night in return for two prospects.
SHOW TRANSCRIPT

It's a bittersweet breakup for second baseman Chase Utley and the Philadelphia Phillies.

Late Wednesday night, the Phillies agreed to ship Utley to the Dodgers in return for two prospects. Utley's been with the Phillies since being drafted in 2000 and in the majors with them since '03. He was Philadelphia's longest-tenured professional athlete.

"He was a huge part of the team that won the World Series plus two pennants and five straight NL East titles. He also was involved in the community off the field, working to raise awareness about animal cruelty," WPVI reports.

But more than three-fourths of the way through the season, it's clear the two have have grown apart.

The Phillies are, well, bad, and their ho-hum farm system isn't exactly rejuvenating the team overnight. Utley, now 36 years old and on the downslope of his career, isn't getting any younger. With the Phillies going nowhere fast, something had to be done.

"We put our heads together and we decided it might be best for us to part ways. ... I gave them a list of a handful of teams that I would consider playing for. ... The Dodgers are a team I grew up watching," Utley told reporters in a press conference Thursday.

But you shouldn't feel too bad for the All-Star second baseman. He's walking into an ideal situation with the first-place Dodgers.

LA is Utley's hometown and he's expected to take a utility bench role for the Dodgers, relieving a bit of pressure to perform as an every-day starter. Utley will also reunite with former Phillies teammate Jimmy Rollins.

Utley's contract features a $15 million team option after this season.