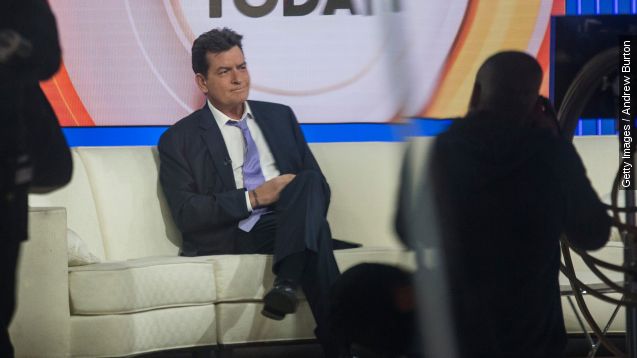 SMS
Charlie Sheen Faces Lawsuit From Former Fiance Brett Rossi
By Katie Link
By Katie Link
December 3, 2015
Charlie Sheen's ex-fiance filed a lawsuit against him Thursday claiming he hid his HIV-positive diagnosis and forced her to have an abortion.
SHOW TRANSCRIPT

Weeks after announcing to the world he's HIV positive, Charlie Sheen is facing a major lawsuit.

Former fiance Brett Rossi accuses Sheen of hiding his HIV-positive status while they were together. According to Variety, she's suing him for assault and battery, emotional distress, and false imprisonment and negligence.

According to People, Sheen had promised to pay Rossi $1 million plus a portion of his income from "Anger Management" to keep her quiet. That plan apparently went out the window after Sheen sat down with Matt Lauer. (Video via FX / "Anger Management")

"What people forget is that that's money they're taking from my children, you know. They think it's just me, but I have five kids and a granddaughter, you know," Sheen said. (Video via NBC)

He allegedly backed out of his deal with Rossi, hence the lawsuit. There's no question the couple's relationship is ... complicated. According to the paperwork filed, the couple met on Nov. 1, 2013, when Sheen paid Rossi $10,000 to have sex with him.

The two were engaged soon after. According to the lawsuit, "If Sheen had disclosed to Plaintiff that he was HIV positive when they met for the very first time, Plaintiff would never have engaged in sex with him, and the resulting relationship between the two would never have occurred." (Video via Extra)

The lawsuit claims Sheen was verbally and physically abusive and even forced Rossi to have an abortion. When the couple split in October 2014, she became suicidal.

Sheen's attorney says he will "vigorously defend the lawsuit."