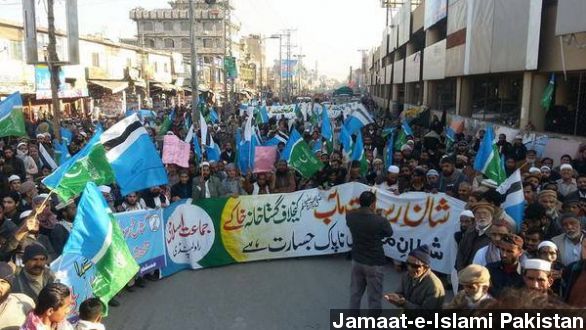 For the past week, pro-Charlie Hebdo marches have been held throughout Europe. But in the Middle East and North Africa, some countries are experiencing just the opposite.

With slogans like “I am not Charlie, I am Muhmmad,” protesters throughout the Muslim world condemned Charlie Hebdo’s depiction of the prophet on the front page of the latest issue of their magazine.

In many countries, protesters ended up clashing with police. A protest in Karachi, Pakistan at the French consulate left four people injured with gunshot wounds, including two journalists.

Forty-five people were injured and four were killed in Niger when police attempted to control a protest after Friday prayers in the city of Zinder. According to the France 24, the French cultural center and numerous churches were set on fire.

Protesters weren’t the only ones to condemn Charlie Hebdo’s cartoon, governments and Islamic authorities both took steps to distance themselves from the publication as well. (Video via Nabaa Media Foundation)

Egypt’s President Abdel Fattah el-Sisi made his own statement Tuesday, giving the prime minister the ability to ban foreign publications which could be considered offensive to Islam. (Video via CBS)

In certain sects of Islam, visual depictions of the Prophet Muhammad are widely considered offensive as it’s considered a form of idolatry.