Charlie Hebdo And Islam: The History Of Its Satire 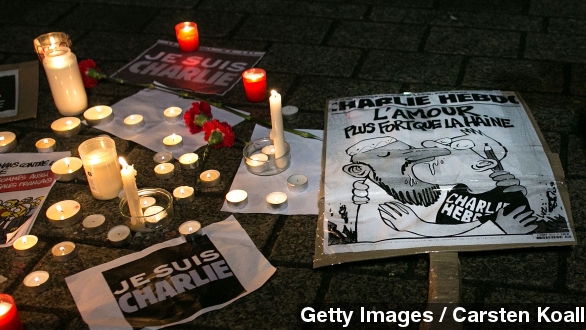 Just hours before, the paper had tweeted this cartoon of ISIS leader Abu-Bakr al-Baghdadi with a message reading, "Season's greetings."

That was hardly the first swipe it's taken at Muslim extremists. Here's a look at the history behind Charlie Hebdo and how it became a target.

Taking its name from Charlie Brown, the left-leaning, anti-establishment weekly was founded back in 1969. After a reader accused it of being "dumb and nasty," Charlie Hebdo turned the phrase into an official slogan. (Video BFM-TV)

It's pushed the envelope ever since. From popes to presidents, no one has been spared the paper's ridicule.

And that includes militant Islam, often printing unflattering takes on the Prophet Muhammad — which is considered blasphemous by many Muslims.

In 2007, two French Muslim groups sued the newspaper's executive editor for defamation. The case concerned 12 Danish cartoons of the Prophet Muhammad printed by the magazine.

As part of the gag, its cover showed a Muhammad cartoon saying, "It's hard to be loved by Jerks."

The editor was later acquitted, and the paper continued poking fun at Islam.

For one issue published in 2011, the paper decided to make Muhammad its guest "editor-in-chief."

The next day its offices were firebombed and destroyed. (Video via ITV)

The following year, France temporarily closed its embassies and schools in about 20 countries as a precautionary measure after Charlie Hebdo published another set of crude Muhammad cartoons, this time featuring him naked and crouching.

Their release came at an especially sensitive time. An anti-Islam YouTube video had triggered protests around the Muslim world. (Video via ODN)

In 2013, Al-Qaeda's Inspire magazine put him on its most-wanted list.

He'd always defended his cartoons, saying there should be no limits when it comes to free speech. In 2012, he said, "If we worried about the consequences of each of our drawings in each of our 1,057 issues, then we would have had to close shop a long time ago."

This video includes images from Getty Images and Charlie Hebdo.