Charles And Camilla Visit U.S. For First Time In 10 Years 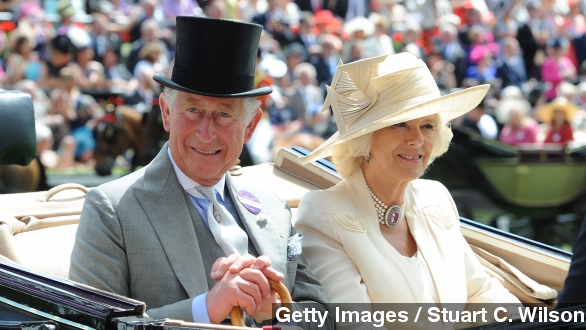 The U.S. has been invaded by Brits. Royal Brits, to be exact.

Prince Charles and his wife, Camilla, the duchess of Cornwall, landed at Andrews Air Force Base in Washington, D.C., on Tuesday evening.

The couple's four-day trip marks the first time in a decade they'd traveled to the U.S. as a couple.

And, boy, is their schedule jam-packed.

To celebrate, Charles will view the version of the Magna Carta written in 1297 housed at the National Archives, and both he and Camilla will visit the cottage where President Abraham Lincoln spent his summers.

And, not surprisingly, the couple will sit down with President Obama on Thursday before they head to Kentucky for several meetings about the environment.

As NBC points out, this is sure to be a very different trip from the one Prince William and Kate Middleton made back in December.

"It's in stark contrast to Will and Kate's dazzling December visit filled with cocktail parties and courtside seats, even if little Prince George was left behind at home," an NBC reporter said.

USA Today reports Charles and Camilla "are making this visit at the request of the British government."

This U.S. trip happens to take place weeks before Charles and Camilla's 10th wedding anniversary. Charles recently opened up about his wife in a CNN special.

"She's, I think, been brilliant in the way she's tackled these things," Charles told CNN.

Duchess Camilla seems to be visiting the U.S. at just the right time, too. CNN recently conducted a poll that found 1 in 4 people like her more now than they did a decade ago when she visited the country.

This video includes images from Getty Images and Ron Cogswell / CC BY 2.0.