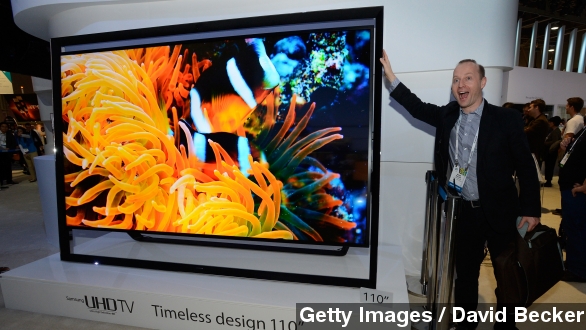 The annual Consumer Electronics Show is all set to kick off in Las Vegas Tuesday, heralding the first glimpse of what 2015 has in store for the future of technology.

Tech companies are expected to unveil thousands of different products across 20 different categories. But there are a few trends that will probably dominate the show floor this year— and they all sound somewhat familiar.

First up: television. The TV industry usually brings out the big guns for CES, and this year they're focusing on two key technologies: 4K resolution and quantum dot displays.

You might remember 4K or Ultra HD resolution from last year's CES, where the technology, which offers 4 times the resolution of a standard 1080p screen, made a big splash but didn't grab much consumer attention.

But this might be the year that changes, thanks to plummeting 4K screen prices and stronger adoption from content providers; notably Netflix and Amazon, which added 4K streaming videos to their services at the tail end of 2014.

TV makers are also planning to unveil a range of displays using quantum dot technology to produce a wider and more accurate display of colors than current OLED screens can manage.

Of course, this is also the industry that promised us curved screens and 3D TVs were going to be the next big thing at previous CES events. So maybe take the hype around these latest innovations with a grain of salt.

As a Businessweek writer notes "you would need an enormous screen or a seat very close to your TV to notice much of a difference between a new 4K product and the HD screen you already own. There’s little chance shoppers will decide to buy 4K televisions faster than they would have anyway."

Next up: automobiles. Car manufacturers have carved out a sizable space for themselves at CES to showcase the newest and shiniest car tech.

Google's famous driverless cars won't be making an appearance, but automakers will be showing off some semi-autonomous driving features in an effort to push the developing technology off the test track and into the car lots.

"Connected car" will probably end up being another big CES buzzword. Both Google and Apple have introduced software linking a car's dashboard to a smartphone; manufacturers now have to decide if they want to throw in with the tech giants, or go it alone and build their own system.

And lastly, we could see a resurgence of the "Internet of Things," that elusive dream of a home full of smart devices. CES has long been showcasing Wi-Fi-enabled fridges and technicolor Bluetooth lightbulbs, but the devices have yet to catch on with mainstream consumers.

So what's new this year? Well, we're seeing a greater focus on platforms rather than single pieces of tech. Apple, Google, Samsung and Intel are all working on ways to connect these disparate devices into one big, cohesive network.

There's plenty more stuff to see at this year's CES — wearables and smartphones and virtual reality, for example — but expect these subjects to take up a big chunk of the conversation. The convention runs from Jan. 6-9.