Cell Execs Throw Down On Twitter Again Over Rankings 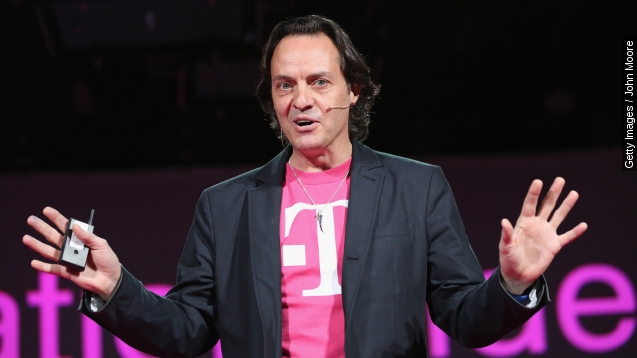 SMS
Cell Execs Throw Down On Twitter Again Over Rankings
By Leah Becerra
By Leah Becerra
August 18, 2015
Sprint and T-Mobile's CEOs are at it again. This time the Twitter battle was sparked by a RootMetrics report comparing the top four U.S. carriers.
SHOW TRANSCRIPT

Cell phone carrier spats can get pretty heated, especially when the execs hop on Twitter to battle publicly.

And considering it wasn't that long ago when T-Mobile overtook Sprint as the third largest U.S. cell provider, research firm RootMetrics' new report only added fuel to the fire.

Here's the gist of what the report found: Verizon has the best overall performance. AT&T took second overall followed by Sprint, which means T-Mobile was stuck in last.

This is the fourth time RootMetrics has issued a summary report "of this magnitude" comparing cell providers' mobile performance across the U.S.

After its release, T-Mobile's CEO John Legere tweeted: "That time of year again! Couple guys from @rootmetrics drive around, get paid by carriers to test networks on a single old-generation phone."

We get it Legere, you're not a fan of the report. But T-Mobile can be proud of a few things RootMetrics found.

For instance, T-Mobile ranked third for overall quality in the 125 major metros that were tested. Verizon and AT&T kept their spots and Sprint fell to fourth.

It doesn't seem like there'd be much to fight about, considering this is data we're talking about, and the report didn't come from a company's own research group.

And it started out pretty harmless. Sprint's CEO Marcelo Claure picked out the positive points about his company and tweeted gleefully. Then, this:

"So important for your calls to go through. We've gone from last to tied for #2 with @ATT  @tmobile, @JohnLegere LAST"

"Did you see @marceloclaure’s crazy tweet rant about this report? Those porting ratios must really be getting to him ;) Hang in there, buddy!"

The back and forth didn't stop there, eventually even including Verizon's VP of Communications Jeffrey Nelson. In response to Legere telling people to "choose what to believe," Nelson tweeted: "Science is science. Testing is testing. Whining doesn't clear anything up."

Toward the end of all this, assuming these guys aren't all still direct messaging their trash talking, things started to get a little personal between the Sprint and T-Mobile execs.

But for those two it wasn't the first time they fought a brutal Twitter battle and it likely won't be the last.