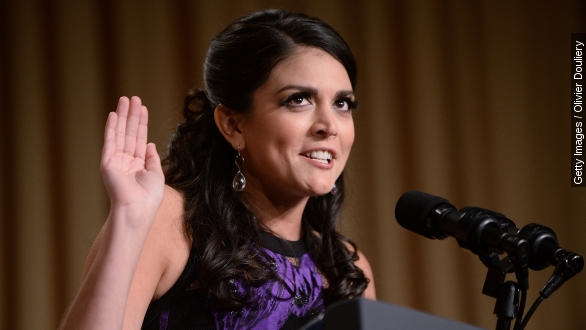 "It is great to be here at the Washington Hilton — is something a prostitute might say to a congressman," Cecily Strong said.

Cecily Strong was the night’s entertainment at the 2015 White House Correspondents’ Dinner Saturday night and we just have one question for her: How did we get from this…

"I still see so many negative portrayals of black and gay people out there. I mean, it’s 2015 and we still have TV characters like Don Lemon. It’s ridiculous," Strong said.

"I guess the most surprising thing is that a guy named Tom Cotton is a U.S. Senator and not a rabbit from a racist Disney cartoon," Strong said.

Strong went no holds barred during her performance, going after media organizations, Republican presidential hopefuls — and even the president himself.

“Your hair is so white now it can talk back to the police,” Strong said.

As retired ABC News White House Correspondent Ann Compton put it, she was an equal opportunity skewerer at the annual dinner.

While she made plenty of people a visibly unnerved, she did get — what sounded like — unanimous praise from the crowd for this Hillary pledge.

"I want all the media to put their hands up and swear something for this election season. I solemnly swear... not to talk about Hilary's appearance... because that's not journalism," Strong said.

Whatever you thought of Strong’s performance, I think we can all agree she had a pretty tough act to follow.

“That’s why I invited Luther, my anger translator to join me here tonight,” Obama said.

“Hold on to your lily white butts,” Keegan-Michael Key said.

“The Pentagon says it’s a national security risk. … instead of doing anything about it we have got senators throwing snowballs in the senate,” Obama said.

Strong was only the fourth woman to host the White House Correspondents’ Dinner since it began in 1920.