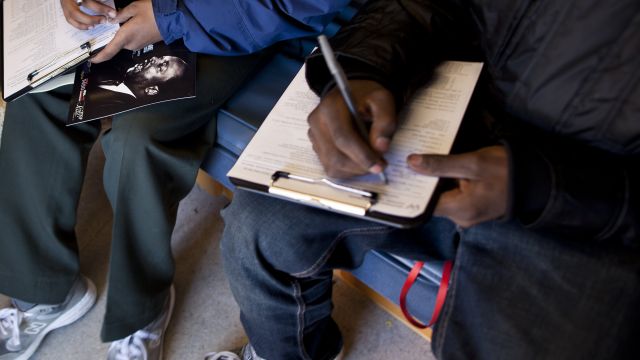 SMS
CDC Says Half Of Gay Black Men Will Get HIV Over Their Lifetime
By Jamal Andress
By Jamal Andress
February 24, 2016
As for why HIV affects the black community so heavily, it's hard to pinpoint an exact reason. But the CDC points to various socio-economic factors.
SHOW TRANSCRIPT

Historically, gay black men have been the group most affected by HIV in the U.S., but a new study from the CDC emboldens that fact with a very staggering stat.

The CDC reports at current rates, half of all gay black men will be diagnosed with HIV in their lifetime. And for Hispanic gay men, the risk isn't much better. White gay men have a much lower risk at 1 in 11.

If measured by transmission group, gay men are the most at risk, followed by women and men who inject drugs.

While the presence of HIV in the black community is well documented, this is the first study to measure the lifetime risk of an HIV diagnosis.

This problem in the LGBT black community is a longstanding one. According to the CDC, diagnoses among young African-American gay and bisexual men increased 87 percent between 2005 and 2014. But as of late, that trend seems to have at least stabilized.

As for why this affects the black community so heavily, it's hard to pinpoint an exact reason. But the CDC points to socio-economic factors like limited access quality health care, lower income and educational levels, and higher rates of unemployment and incarceration.