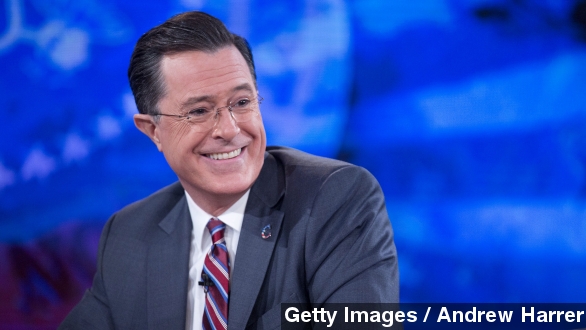 SMS
CBS Sets Colbert Premiere Date, Format Still Unknown
By Danny Matteson
By Danny Matteson
January 12, 2015
Stephen Colbert will make his debut as the "Late Show" host Sept. 8, but what the show will look like is still unclear.
SHOW TRANSCRIPT

For CBS' "Late Show," the passing of the torch just got penciled in.

Stephen Colbert will make his debut on the long-running late-night show on Tuesday, Sept. 8, the network announced Monday.

For the record, that's just about nine months after Colbert's final, star-studded episode of "The Colbert Report" aired on Comedy Central — a window of time Colbert himself couldn't help but take a jab at in a CBS press release: "I have nine months to make a show, just like a baby. So first, I should find out how you make a baby."

Colbert's premiere will come about four months after David Letterman's last night of unveiling top 10 lists and dropping things off the roof of the Ed Sullivan Theater. That's set for May 20.

So the new show has a premiere date, and it will stay in the same New York theater Letterman called home. What it doesn't have yet? A format.

As Entertainment Weekly notes, CBS' president has said Colbert's team is just beginning to "work things out," and the show will have music and guests and might start with a monologue.

Not exactly a lot to go on.

And not terribly different from other late-night programming, with nearly every late-night show from Johnny Carson to Jimmy Fallon employing the monologue-guest-music formula.

Whatever he does, Colbert won't be the only new addition to CBS' late-night schedule this year.

And there seems to be a similar lack of direction on that show, too.

TV Guide tweeted from the Television Critics Association winter tour that Corden said he knows nothing about what his show will be like.

So all eyes are on the eye; we're just not sure what we'll see. Colbert is reportedly bringing the entire "Colbert Report" creative team with him to CBS. The network will air reruns of prime-time shows between Letterman's last episode and Colbert's first.