Cavs' Matthew Dellavedova Goes From Zero To Hero In A Blink 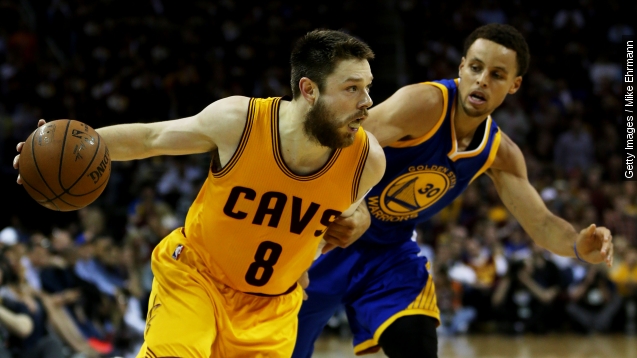 He's a skinny, 6-foot-barely-anything guard, who's quick on his feet and has enjoyed a meteoric rise to fame. No, not Steph Curry. The man tasked with shutting him down: Matthew Dellavedova.

Since Kyrie Irving suffered an injury in game one of the NBA Finals, the scrappy, undrafted Australian phenom has filled the void better than any Cleveland fan could've imagined — and people have definitely taken notice.

"This year's surprise breakout star: Matthew Dellavedova. His crazy hustle has Cleveland on the brink of their first championship ever," a WJET anchor said.

"Matthew Dellavedova may be the most popular Aussie right now. He's like the unsung hero of the Cleveland Cavaliers," a KVVU anchor said.

Delly's rise to stardom even got Mike and Mike to do a whole segment devoted to their favorite Australians.

It's considerably fair praise for Delly who's been playing like a man possessed, hustling and diving after loose balls, providing an unforeseen spark to the Cavs that would otherwise rest solely on the shoulders of LeBron James.

"Whatever he has in the tank, he's gonna give it all. And, if he has to go to dehydration and cramping again, I think he'd probably do it again," James said. "He gives it all to our team, and we just try to reciprocate that back to him. Let him know we're out there giving it all as well."

And, he's been all over Curry like a gnat on an outdoor fluorescent light. Dellavedova helped the Cavs hold the league MVP to one of his worst shooting performances ever in game two — where Curry shot just 5-of-23 from the floor.

And not a whole lot changed for most of game three until Curry finally caught fire down the stretch.

"He's like the best pest ever," ABC's Lara Spencer said.

"You could see it on Curry's face. He was like, 'Get this guy away from me,'" sports commentator Jesse Palmer said.

Dellavedova's unlikely stardom even got a Cleveland.com sports writer to issue an apology for criticizing his game earlier in the year.

And it's not just the media. Delly's pretty much become an overnight favorite across the NBA fan base.

According to online sportswear retailer Fanatics, sales of Dellavedova's No. 8 jersey have exploded. His jersey was the top seller Wednesday, outselling King James' jersey and every other players' in the league. (Video via WFMJ)