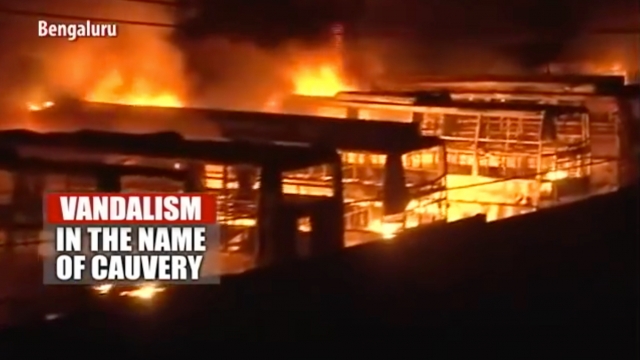 Protesters in India want water — so they set trucks and buses on fire. And clashes with police left at least one dead.

India's water supply has been decreasing. And it's no different in reservoirs connecting two farming states in southern India.

It boils down to this river — the Cauvery. It runs between multiple states, but the main argument is between Karnataka and Tamil Nadu.

Karnataka has control over releasing water to Tamil Nadu — and the Supreme Court demanded the state do just that at the beginning of September after Tamil Nadu said it wasn't receiving its allotment.

Protests continued even after the court reduced the amount of water that needed to be released.

If it seems like this dispute is intense, keep in mind it's been going on since British rule in India at the end of the 1800s.

There have been several attempts to resolve the issue since India gained independence and its states were redrawn, which also reignited the controversy.

There have been mass protests over the years.

Several opinion pieces have pointed out that the conflict is in some ways less about water and more about "regional identity."

But, farmers in the states mostly grow plants heavily reliant on water, so it is a matter of livelihood.