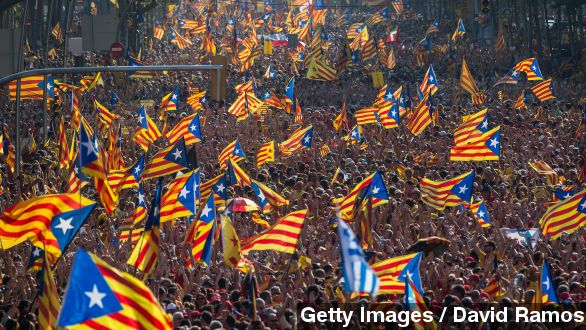 By Matt Picht
September 19, 2014
Catalonia's parliament has passed a law authorizing an independence referendum on the same day Scotland rejected its bid for autonomy.
SHOW TRANSCRIPT

Hours after Scotland rejected a bid to gain independence from the U.K. on Friday, Spain's Catalonia region took a big step toward holding an independence referendum of its own.

Catalonia's regional parliament has authorized a "consultation" vote on independence for the region, with a presumptive November 9 date. The Spanish government, meanwhile, has condemned the possible vote as illegal.

Nearly two million people lined the streets of Barcelona a week earlier in support of independence. Spain's painful financial crisis has swelled the ranks of Catalans pushing for independence.

The decades-old independence movement has also been bolstered by Scotland's referendum. Catalonia's President Artur Mas told reporters he admired the U.K.'s commitment to a democratic referendum and expected the same process from Madrid.

"It is more important to hold the referendum than the independence. ... This represents high-quality democracy."

But Spanish Prime Minister Mariano Rajoy, who opposes Catalan independence, has been quick to congratulate Scotland for choosing not to break with the U.K.

In a televised speech, Rajoy said Scotland has avoided severe economic and social consequences by rejecting independence. He called Scotland's "no" vote "the best option for everyone — for themselves and for Europe."

Catalan independence faces an uphill battle in the future — mostly due to the Spanish constitution, which prohibits any referendum that's not authorized by the Spanish parliament.

Spain is likely to take the Catalan parliament's new law to the country's constitutional court, which has favored Madrid over Barcelona in the past. An Al Jazeera reporter speculates things could get ugly if the court rules against Catalonia's referendum.

"Who knows, we could even see the Spanish government perhaps even forcibly arresting certain members if that were to happen."

If held, Catalonia's planned referendum wouldn't actually result in legal separation from Spain, but would instead provide President Mas with a political mandate to pressure Madrid for independence.