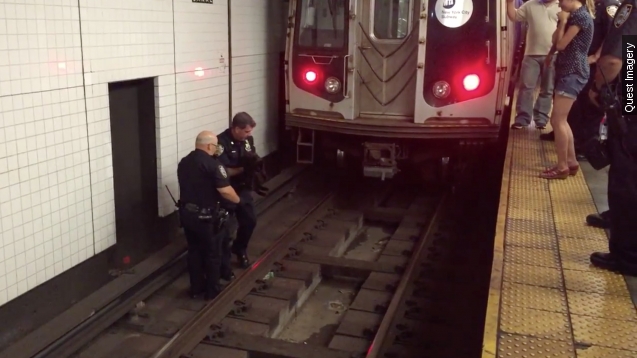 If there's one universal truth, it's that cats are adorable. If there's a second, it's that the Internet is in love with them.

Combine the two, and we have an an adorable cat who is not only breaking the Internet, but also breaking down the New York City metro system after he jumped onto metro tracks.

A professional photographer with Quest Imagery just so happened to be in the midst of the kitty drama. In the video, you see two officers getting onto the tracks and slowly walking toward a finicky feline.

The New York Post said, George, that's the name of the cat, was on a leash. His owner said when he got spooked by the noise of the train, he ran off. She said she told the train operator, who cut off the power on the line.

Two cops successfully catnapped George and returned him to his owner without causing a 'cat-astrophe.' Sorry.

George successfully fulfilled his dream of stopping or rerouting more than 80 trains and annoying some 10,000 commuters when he caused delays in the middle of rush hour.

Hey, they say if you're gonna dream, dream big.

The NYPD posted a photo of the two officers credited with saving George. And, sounding quite kitten smitten, the officer who picked him up said:

"He looked at us. I picked him up, he reached for both of my shoulders like a baby. He almost hugged me."

There goes one of his nine lives. Eight left, George. To watch the entire video, go to Quest Imagery's YouTube page.

This video includes visuals from Quest Imagery, an image from Trish Hamme / CC BY 2.0 and music from Kevin MacLeod / CC BY 3.0.