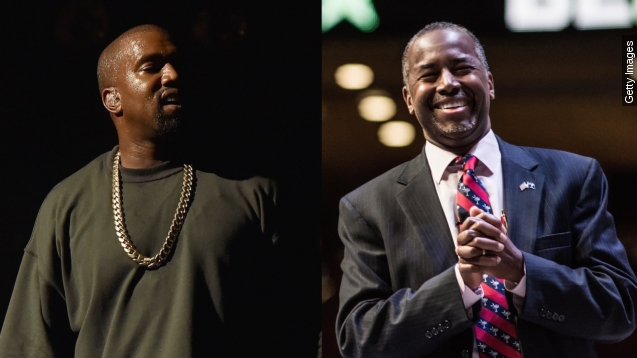 SMS
Carson And Kanye: A Strange Love Story
By Eugene Daniels
By Eugene Daniels
September 27, 2015
This week brought us something we didn't even know we were missing: a love story between Kanye West and Ben Carson.
SHOW TRANSCRIPT

Who says there's no unity or love in politics? Well, most people but Ben Carson may have proved us all wrong Sunday when he was asked about a Kanye West presidential run. (Video via Ben Carson,CNN)

“Well, I am certainly willing to give him a chance. He’ll be able to explain things and see if he resonates with the people,” Carson said on ABC Sunday morning.

Yep, you heard that right. Dr. Ben Carson seems to be warming up to the idea of a Kanye 2020 presidential run.

And it seems like the love is mutual. Kanye told Vanity Fair, "As soon as I heard [Ben] Carson speak, I tried for three weeks to get on the phone with him. I was like this is the most brilliant guy." Kanye did eventually spend 30 minutes talking to Carson on the phone and even spit a couple verses for the Republican presidential candidate.

If you don't remember (shame on you!), Kanye announced he was running for president in 2020 at this year's MTV Video Music Awards.

Most people probably wrote off Yeezy's presidential announcement as a joke (raises hand) but Kanye has really been sticking to his guns.

Before you register your Carson/Kanye PAC, the rapper hasn't gone as far as endorsing Carson. And this pic of Kanye, Kim & Democratic frontrunner Hillary Clinton suggests he's not likely to officially get behind a GOP candidate anytime soon. (Video via Universal Music Group)