Cars Take Up A Lot Of City Space 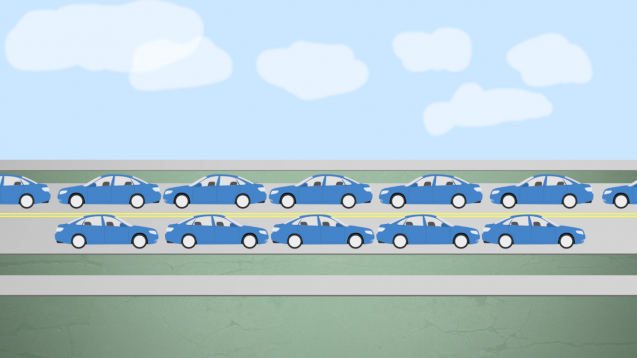 SMS
Cars Take Up A Lot Of City Space
By Zach Toombs
By Zach Toombs
October 4, 2015
Our cities are running out of space, and cars are taking up a lot of it.
SHOW TRANSCRIPT

America loves its cars. But they take up a lot of space. And that’s a problem for cities, especially when you see just how much our population has shifted into those cities — and how little space we have left there.

Consider this: 69 people on a city street only take up this much space on bikes — this much if they were all on a bus — but this much when they decide to drive. That’s a lot of space for a relatively small number of people.

As seen in Latvia, where bikers protested by fastening makeshift car frames to their bicycles, showing how much extra space cars occupy.

But eliminating cars isn’t the answer. In many places, it’s just not practical. Instead, cities can create different kinds of traffic flows. Like bike lanes, carpool options, and public transportation.Then we can start reclaiming some of that public space for, you know, the public.