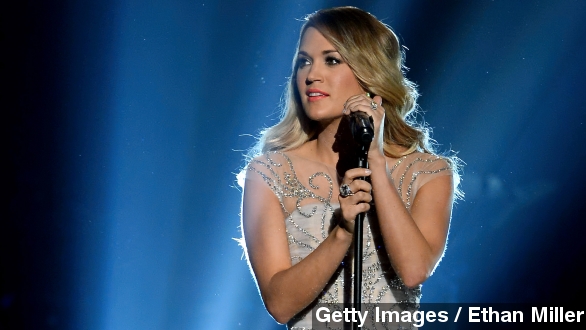 Carrie Underwood and her husband, Mike Fisher, have finally welcomed their bundle of joy.

The singer announced the birth of their son, Isaiah Michael Fisher, on Twitter. Tuesday she wrote, "God has blessed us with an amazing gift!"

Of course, we already knew Underwood was expecting a little boy, thanks to Brad Paisley's loose lips at the CMA Awards in November.

"Will you just please tell me what you're having?" Paisley asked Underwood.

"We could name him Garth!" Paisley said.

"What are you doing?" Underwood asked.

Now, the whole gender announcement was planned ahead of time, so thankfully Paisley wasn't really in the doghouse.

Though Underwood told ABC Radio Paisley didn't learn it was a boy until right before that bit, saying: "He's a blabbermouth! So, I was like, 'I'm not gonna tell you until we're ready for the rest of the world to know, 'cause I know you'll tell people.'"

Underwood announced she was expecting back in September, posting an Instagram photo of her two dogs wearing shirts saying they were going to be getting another sibling.