Be Careful, April Fools' Day Is Alive And Well 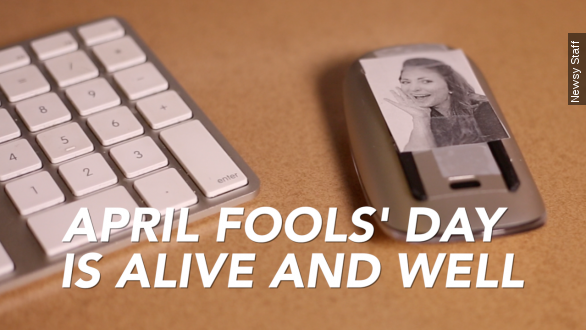 SMS
Be Careful, April Fools' Day Is Alive And Well
By Evan Thomas
By Evan Thomas
April 1, 2015
You’re going to want to double-check anything you see on the Internet today. If it sounds too good or too weird to be true, it probably is.
SHOW TRANSCRIPT

Today’s the day you can’t really trust anything you see on the Internet, or in your own newsroom. It seems the only way to not get pranked somehow is to not leave your house.

Researchers at CERN, for example, confirmed the existence of the Force this morning, which we would be more than happy to take at face value. (Video via CERN)

“Practical applications so far include long-distance communication, influencing minds, and lifting heavy things out of swamps.”

Google continued its storied April Fools history with com.google, which is exactly what it sounds like: all of your search queries end up backwards.

There’s now a pac-man overlay on Google Maps, as well, because why not.

Uber announced plans to deploy boats to the streets of Bangkok. Not the city’s waterways, but its streets.

Spinning off Uber, Groupon announced its own ride-sharing service Grouber. The drivers are cats.

Even T-Mobile is in on the fun, with a new $5-per-line add-on to get your family pets included in your wireless plan.

So consider this your warning: remember to be even more skeptical than usual when it comes to the Internet today. If it sounds too good or too crazy to be true, it probably is. Sorry, Star Wars fans.

This video includes music by Bensound / CC BY ND 3.0.